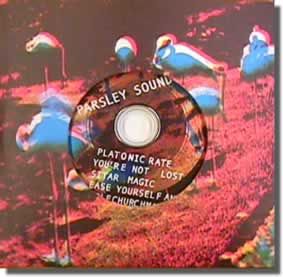 Remember the name Parsley Sound because you're going to be hearing it a lot.

Parsley Sound, to fill you in, is actually just two people. It is the creation of Preston Mead and Danny Sargassa. They are an UK project destined to climb to the top of the brit pop heap alongside Coldplay, Doves, Elbow and South.

While one can hear with just a single listen why Parsley Sound belongs there (as it can be mistaken for few things other than brit pop) the confusion might come in where exactly in that company it fits. Coldplay and Doves seem to be directing their sound towards a more upbeat/anthem-like quality, this is not the area Parsley sound is attempting to touch down in on Platonic Rate. Elbow is the most popular band from the angle of brit pop that is more stripped down and softer and includes bands like I Am Kloot, Alfie, Kings of Convenience (and countless others who blur the line between brit pop and folk).

Parsley Sound certainly wouldn't be at home with those bands though. South's distorted sound of new shoegaze is closest to what Parsley Sound creates on Platonic Rate, but Parsley Sound is far more multidimensional than South. Maybe the best comparison is Zero 7. They remind me a lot of Zero 7 in the way they draw on many (and varied) influences but are still able to create something that is all their own. Parsley Sound is Zero 7inchs negative- similar in many ways but much darker and cooler than Zero 7, they are also able to avoid the soft rock depths that Zero 7 unfortunately delves into on occasion.

OK, comparisons aside the crucial piece of info that you need to know about Parsley Sound is that they're good. very very good. This five song EP will only require one spin to hook you, but repeated listens reveal a band that loves its craft and fills their music with subtleties to ensure songs don't halt and jerk into one another but spill into each other. Song two is a logical progression from track one (and track three from two, etc.), it is in this way that Platonic Rate isn't simply an EP but a mini album.

Vocal tracks and instrumental tracks blend together seamlessly on Platonic Rate, being able to do this while also keeping the complexity that comes from drawing on many influences is something most bands wouldn't even try to attempt (especially on an EP, where all that is expected is a collection of songs to showcase the band). That is where Parsley Sound's genius is though, their music is bold and filled with the integrity inherent in making music that no one else is making.

Parsley Sound defies comparison, which is why there isn't an opening on the brit pop board to fit Parsley Sound's mold. Platonic Rate opens with the song of the same name; this is the stand out of the EP. This track is an absolutely brilliant accomplishment. I find that this song is still getting better with repeated listens. The vocals are whispered and echoed. They may at first seem simply good. but they truly are incredible.

I listened to this EP countless times on my headphones and personal stereo and assumed I knew the song inside and out. When I played it in a car, however, I was able to appreciate how thick these vocals are. A different layer of echo would come out of each of the four speakers and collide to hit a musical height that few of Parsley Sound's peers can touch. If ever there was a song for surround sound. . 'Platonic Rate' is a masterful lullaby and is the perfect introduction for this short collection of songs.

The next two tracks are instrumentals that are what one might imagine coming from a collaboration between Jason Pierce and DJ Shadow (I don't know what planet that would actually happen on). These songs bring the tone of the album into an even more hushed/ambient but still excellent (and unique) territory. Then the listener is hit with 'Ease Yourself and Glide'. Wow. The most upbeat and uplifting track on this EP takes me off guard on every listen with its optimistic beauty after listening to the melancholy chill of the first three songs.

Platonic Rate closes with a trip hoppy instrumental that lets Parsley Sound gently fade into silence. I can't wait for the full length. and you shouldn't wait- this EP belongs in your CD collection.