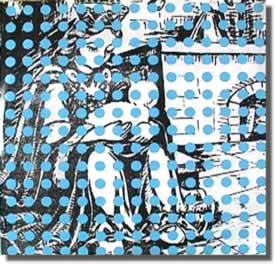 Macitajs on Acid is a punk rock band of Latvian descent. The band was founded by two brothers, Laris and Kristaps Kreslins, the sons of Latvian immigrants to America. Laris and Kristaps form the core of the group on drums/backing vocals and guitars/lead vocals respectively, and they play with a variety of different bassplayers. Information on the band is scarce, and the only helpful Internet sources, the Tornis website and the Macitajs homepage neglected to include the group's discography. I do know that they released a 7inch in 1995 and a split cd with the band Kavune in 1996. Also, Laris Kreslins is responsible for the excellent Sound Collector zine.

I assume that 'Friki Diki: the enrique tapes 1992-2001' is a collection some of Macitajs on Acid's recordings between 1992 and 2001, but I am not sure. It may just be a joke-y title; however, the inclusion of many short, incidental tracks among the disc's 30 songs seems to support the assumption that this music was not meant, originally, to be heard at once.

Anyhow, these guys play Latvian punk rock. Vocals are almost all sung in Latvian with the occasional English phrase thrown in. They do not play '77 punk rock by any means. Theirs is a much art-ier style, reminding me of the 'worldly' West Coast rawk of the Meat Puppets or the Minutemen at times. The Latvian vocals are a very neat aspect of the music, sounding, probably just to my Western ears, tribal in its force. Ten tracks on the disc are simply snippets of Latvian talking, providing nice breaks between the music and keeping 'Friki Diki' engaging through all the way through.

I do not mean to over-intellectualize. This disc contains some real nice, rough punk rockin. Some songs even drift into darker, slower territory, and these are well crafted enough to remain interesting. The dynamics of the band allow smooth transitions from intricate passages to in-yr-face big riffage. Best punk rock band to come out of Latvia yet.