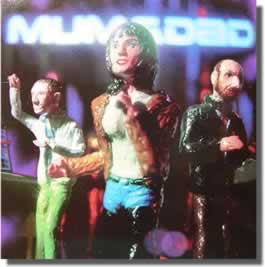 What a single! Mum & Dad have the best elements of Canada's Pest 5000, Boston's The Phenomenological Boys, and (believe it or not) mid-70's Hawkwind. I really love this band.

The fact that they are on Damon Gough/Andy Votel's label Twisted Nerve just adds more mystique to them. Along with Cherrystones, Mum & Dad break the mold of the Twisted Nerve label, whose roster is filled with acoustic and mellow bands (with the exception of downtempo styling's of Andy Votel himself.)

Mum & Dad have released a handful of singles and cuts on Twisted Nerve compilations. 'Kiss Of Death' is the first single from their debut self-titled LP. The song 'Kiss Of Death' is a killer. Anyone who loves the sound of bands like Sonovac, Ladytron, or Chicks On Speed will be sure to like Mum & Dad, though Mum & Dad are in no way imitative of any of those other bands. Mum & Dad seem like a real 'band,' just as Ladytron are. There are traditional instruments like guitar, bass, and drums in Mum & Dad's sound, along with cheap electronics, and occasional accents like violin.

'Kiss Of Death' has a passage that sounds like the shower scene music in Psycho, a violin that made me think of Pest 5000, electronics that scream mid-70's Hawkwind,and a soulful vocal that reminded me of Angela from The Phenomenolgical Boys, or even of Grace Slick in mid-60's Jefferson Airplane. The song holds these wrappers inside a fuzzed out bass that bleeds the speakers. Somehow I don't think the band would mind my Hawkwind or JA comparisons. They even covered the Black Sabbath song 'Black Sabbath' as the A-side of an earlier Twisted Nerve single.

The next song is 'Million Dollar Teardrop.' It is a quiet spacey track that has the type of mystery that Julian Cope tried to call up in Teardrop Explodes tracks such as 'All I Am Is Loving You.'

The EP closes with the Little Miss Trinitron remix of 'Kids With Psychic Powers,' a track from their impossible to find first single, the 'All Oar Nothing' EP. 'Kids With Psychic Powers' is an upbeat number that has the happy go lucky energy of Stereo Total. It is the reason you would buy this single, in my opinion. The vocals are sung by two children, Khia and Leighton Penny.

As I said at the start, what a single!