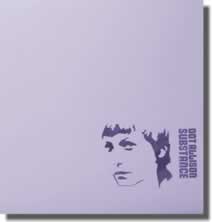 It was maybe three years ago when I first heard of Dot Allison. On the Saint Etienne 'Avenues' E-mail list people kept mentioning One Dove, whose 1993 'Morning Dove White' CD was already out of print.

There was also a whisper that the bands leader - Dot Allison - was about to release a big budget solo record. Shortly thereafter the 'Colour Me' EP came out, followed by the 'Afterglow' LP. Dot Allison picked up the label 'the comedown queen,' but her popularity did not soar as much as many would have liked.

Now in 2002 Dot has re-engineered herself to make a splash in the electroclash world causing such a stir this Summer. She has cropped her hair and made friends with the electronic beat. 'Substance' is her first release in collaboration with electro artist Radioactive Man, and the first single from her 'We Are Science' LP.

This 12inch has the LP version of 'Substance,' a non-LP B-side called 'Lo-Fi Love Song,' and a Felix Da Housecat remix of 'Substance.'

'Lo-Fi Love Song' has the slow tempo of a Mazzy Star song. In fact, gullbuy reviewer Patrick told me that he thought that 'Substance' sounded like an electronic Kendra Smith in Opal, and I had to agree. 'Lo-Fi Love Song' sounds fairly close to stuff Dot Allison recorded on her 'Afterglow' album.

I like the original version of 'Substance.' It sounds a bit more distinctive than the Felix remix, which sounds very similar to many other electroclash tracks. Felix Da Housecat did make the track a dancefloor killer, but he homogenized it along the way, and took away a little of what made the track sound different than the many other pretty good tech-pop songs making the rounds right now. Its almost like he put it through a Felix machine, trying to give it a sound instead of trying to find what it had that made it special, and working with that.

Plus, he gave it a strange break in the middle that reminds me of nothing so much as Soft Cell's 'Tainted Love.' The break doesn't particularly make sense - it sounds like it is another mix instead of the second half of the same track.

But frankly, there is little you can do to mess up a song as good as 'Substance.' It is (like most killer tracks) a simple song at heart, and it is attractive in both mixes presented on this single.

I like this new look and sound for Dot Allison, and wish her much success.