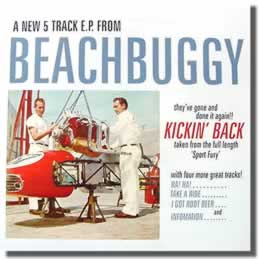 How odd, a CD single released for a song taken from an album that came out over a year ago.

Mind you, I'm not complaining; these four new songs (plus 'Kickin' Back' from their Sport Fury album) continue along in the Fall-meets-Pixies vein quite competently.

Still, no big surprises from everyone's favorite drag racing-obsessed Limeys. Dunno if any but the album cut were recorded by Steve Albini, there's no credit; not that it matters or anything.

My favorite track is 'Information' -- great pummelling beat! Actually it sounds a LOT like another track on the single, 'Ha! Ha!' which I just don't like as well. 'I Got Root Beer' is more pep than plod; a nice change of pace.

This CD also includes the mpeg music video for 'Kickin' Back,' complete with goofy outtakes from the shoot.