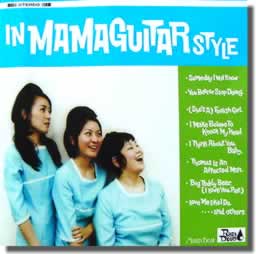 Originally released in 2000, 'In Mama Guitar Style' is the second full-length album from this cool trio of '60s-worshipping Japanese chicks. They started out in '96, releasing their debut LP, 'Introducing...' in 1999. Jun, Iris and Yoko play a rockin' mix of Beat/British Invasion and US Girl Group (ala Shangri-las) and teen pop with a dollop of Mod thrown in for good measure. At times they sound like the Detroit Cobras with the R&B knob turned down; poppier cuts recall April March's old combo the Pussywillows. Their sound is VERY authentic -- the recordings on this CD could easily pass as vintage. And for all you xenophobes out there, they sing in English.

The 10 originals written by singer/guitarist Jun stand their ground alongside four covers: the Yardbirds' (originally Ernie K. Doe, penned pseudonymously by Allen Toussaint) 'A Certain Girl,' 'My Boyfriend's Learning Karate' (originally by Charlie and Chan, also covered by Thee Headcoatees), '(Ain't It) Just Like Me' previously done by artists as diverse as the Hollies and the Coasters, and 'F-E-E-L' by the Animals.

Some of my favorite originals are 'You Need Your Beat,' 'Love Me Like I Do,' 'I Make Believe to Knock My Head' and 'Big Teddy Bear' but let me make clear that I think the whole album is super.