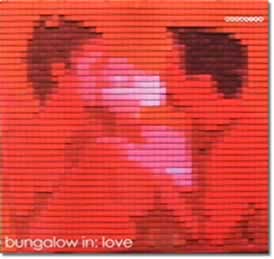 This 3inch CD six song sampler was only released by Bungalow as a promotional item. I'm not sure when it actually came out, but it had to be sometime in the summer of 2001 as it lists Mina's 'A to B' album as a forthcoming album, release date 27.08.01. Whenever it WAS released, 'bungalow in: love' is a fine disc that came into my hands through the NYC distributor/promo company Triage International.

The CD starts off with a 3:31 edit of the Mina song 'Desktop.' Removed from the context of the Mina album 'A to B' this song stands out and sounds really fine. 'Desktop' has female vocals throughout it. Generally Mina are an instrumental band. 'Desktop' lives up to the original Bungalow vision of 'club pop'.

The Maxwell Implosion song 'Homme en Peluche' is my favorite track on this sampler. It is taken from the CD 'Small Circle of Friends', which is in the stores and even has a US release courtesy of Emperor Norton. The name of the CD is taken from the amazing Roger Nichols and the Small Circle of Friends harmony pop band from the late '60s. The vocals on the track are by Laila France, the Thai artist which Bungalow released a pretty good LP from 5 years ago. She pulls the song from just being great to being close to sublime.

Stereo Total are next. I love the song 'Musique Automatique', but I have listened to it many times on their newest record of the same name. I wish Bungalow had taken a B side from one of their singles for this sampler. However, if you have never heard this track it just may be your favorite of the whole sampler, that's how good Stereo Total are these days.

Like Laila France, Dauerfisch are one of Bungalow's early signings, back with a low overdue second record. 'Norm & Normas Diet' does not do much for me though. The song is played too straight as a guitar based pop song, sounding very much like the Liverpool band Ooberman. Ooberman themselves let me down with releases after the 'Magic Treehouse' album, which I really liked.

Le Hammond Inferno are a very much hit or miss band to me. I love some of their stuff, but a large amount of their recorded output just leaves me cold. Happily, 'Herbert' is a super track that sounds like Playgroup, with an ESG styled vocal and a Jah Wobble styled bass part. 'Herbert' sounds like it should have come out on the Tummy Touch label. Maybe I have to check out their 'My First Political Dance Album' again, as this song is an edit of a track from that disc.

The sampler closes with a new band called Olympic Lifts. I do not like their song 'New Wrecking Crew' at all. It starts off with an acapella harmony verse, then goes into the song proper, reminding me in turns of (eighties band) Fun Boy Three and Beastie Boys, without the distinctiveness of either.