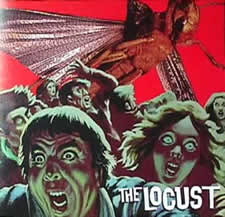 Once upon a time, I worked with a kid who was really into a genre of music he called 'Power Violence.' Not being especially into noise bands but curious all the same, I asked if there were any particularly interesting records. He suggested I check out this album (only on 12inch vinyl at the time) by The Locust (not to be confused with Mark van Hoen's Locust).

What I heard was soooo f'ed up that I bought it just to have so when, years down the road, when I get into conversations about 'the most f'ed up records I've heard' I can play the record instead of trying to describe it.

The original vinyl was only 13 minutes long; for the CD release, they included five additional tracks, making the CD version a whopping 16 minutes (they even fit it all on a 3inch disc).

This San Diego band includes former members of hardcore bands including Struggle & Swing Kids. The music is grindy, thrashy, hectic and spastic, with screamo vocals. What really sets this band apart for me is the cheesy keyboards they add to the mix.

The best part is that their songs are so short (only four of the 20 tracks here are over 1 minute) that you can throw one in the middle of your set to perk things right up if it's starting to drag, but before your listeners can get to the radio to change stations, the song's over!

Fave tracks include 'Backbones of Jack Asses,' 'Straight from the Horse's Mouth,' 'Skin Graft at Seventy-Five Miles an Hour,' 'Normal Run of the Muck,' 'The Perils of Believing in Round Squares,' 'Kill Roger Hedgecock,' 'Nice Tranquil Thumb in Mouth' and 'Well I'll Be a Monkey's Uncle.'

They include the lyrics, so you can see what all the yelling and screaming is about, but who really cares.