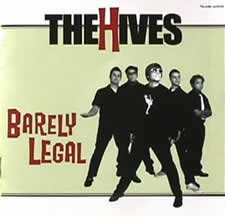 When we added the Hives album Veni, Vidi, Vicious, my gullbuy review said something about 'a buzzy mix of sixties garage trash and seventies punk with lashings of new wave' and also name checked the Stooges, Undertones and Boys. I also mentioned something about getting all their albums for the station.

Barely Legal was originally released in Sweden in 1997 but it didn't come out in the States until 2001 when Mike Lavella licensed it for his Gearhead label. Thanks, Mike!

This album is a tad more raw and the band is obviously not as mature... but that's not to say the rekkid is not RAWK! For it is!