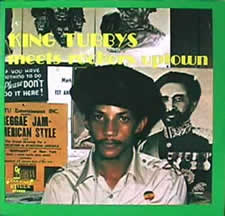 This is one of those records that goes in and out of print as different labels release small run versions of a timeless classic.

I bought the 1994 Shanachie CD version a little over a year ago. Clock Tower has just released this newly mastered version.

Many people consider 'King Tubbys Meets Rockers Uptown' the greatest dub record ever made. Personally I still hold Burning Spear's 'Garvey's Ghost' (the dub companion to their 'Marcus Garvey' LP) in that regard.

However, there is no disputing the excellence of the tracks on this LP. In fact, many of Burning Spear's players are here: Aston (Family Man) Barret Leroy on bass, Earl (Chinna) Smith on guitar, and Carlton (Carlie) Barret on drums. In addition, the infamous Robbie Shakespeare plays bass. Of course the man of the hour Augustus Pablo is here playing organ, piano, and clarinet.

What does it all add up to? Deep, deep bass that your bones hear more than your ears; echo spinning your brain around in an arc; echo and reverb playing the devil with a sound here and there. My favorite tracks are 'Young Generation Dub', 'Corner Crew Dub', and 'Frozen Dub'.

The thing that kept me from listening to reggae for years since my youth was the vocals. The world of spliffs and jah has little to do with my current life. I love dub so much because it distills the tracks down to their purest instrumental form and has given me back a love for a genre I had forgotten.