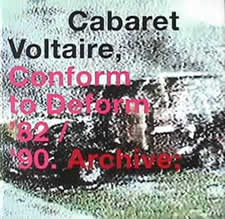 This three CD box set covers their career as Cabaret Voltaire, and includes treats such as a 2001 Richard Kirk remix of 'Just Fascination'.

The music sounds much more at home in 2002 than it did when it was originally released. As I am not a fan of live discs, to me this box is a two CD set (the third disc is a well done live recording from June 8, 1990 in Edinburgh).

Spread between the two discs of studio tracks are many cuts that make me realize what I missed when Cabaret Voltaire were happening.

Highlights of Disc 1:
'Code' is fantastic. The sound is completely contemporary. There are electronics and sounds like banging on metal objects, all very glossy.
'The Web' sounds like it could be the new 12inch from International DeeJay Gigolo Records. It is male vocal electropunk. There is a second version called 'The Web (respun)' that is less linear and less song based. Both versions are quite different and quite fine.

When I first considered writing about this box set it seemed overwhelming. As I finish right now all that overwhelms me is how good some of these tracks are: I will buy the new Virgin Cabaret Voltaire single CD comp 'The Original Sound of Sheffield '83-'87 - Best of The Virgin/EMI Years' for the gullbuy.

photos of the sleeves of the three discs:

other Cabaret Voltaire in the gullbuy: