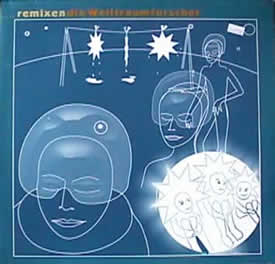 On one of the labels formed by Felix Kubin, this LP contains 13 tracks by artists covering Die Welttraumforsher songs.

There are well known artists (Mouse On Mars, Barbara Morgenstern, Schlammpeitziger, Felix Kubin), some lesser known bands you may have heard mentioned in the whisper stream (Minichev, Nova Huta, F.X. Randomiz, Klangwart), and some bands that will surely be new names (Neoangin, Harold Sack Ziegler, Kiss Kiss Bang Bang, Joe Tabu). Die Welttraumforscher even put in a mix as Forscher in der Nacht.

I reviewed the Die Welttraumforscher 'Das Licht Loon'. Even though I liked that CD, I like this LP better. If you had to characterize the sound in a word, you'd say 'electro pop'. But the complexity of the tracks on this collection really need to be explored by ear.

Minichev's version of 'Flying Through The Door' has crazy music grounded by vocals kind of like Damen from the Boston band The Swirlies.

Felix Kubin's version of 'Radio Pangea' bounces along as an upbeat percolating instrumental in the Andreas Dorau/ Der Plan tradition.

Joe Tabu's track at the start of side B seems to mix a Dog Faced Herman styled trumpet part, a scratchy old record, and an African tribal song.

Klangwart is a band that Felix Kubin plays in. Klangwart's version of 'Ein Feuer aus Licht und Liebe' is especially interesting to me. It is a quiet track with German male vocals over a Blair Witch-like whispered reading by Dobroslawa Robinski in Polish. It is a very peaceful track.

Gagarin is a poorly distributed label, making releases hard to find. They put out another compilation which had some of the tracks which made it onto Helgoland's 'Media Music' CD and a few solo tracks by Brezel Goring (of Stereo Total).

I'm pretty sure that any record you can find on Gagarin would be worth checking out. This one surely is.