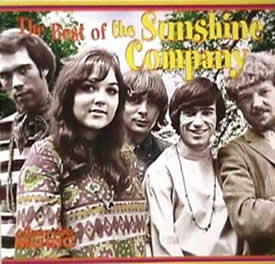 Somewhere between the Mamas and the Papas, the Millennium, Simon & Garfunkel and Jefferson Airplane, The Sunshine Company mix harmony with wonderful acoustic arrangements.

The Sunshine Company picked a stellar group of songs to covers like Steve Gillette's Back on the Street Again -Track 3- (their only major hit), Tony Asher and Roger Nicholls' Just Beyond Your Smile -Track 7-, The Boylan Brother's Look, Here Comes the Sun -Track 10- (John Boylan went on to produce the Eagles), The Beatles' George Harrison penned -Track 6- I Need You (a Mary MsCaslin arrangement), If You Only Knew -Track 16- from Curt Boettcher's pre-Millennium band, the Ballroom, and even a young Greg Allman penned tune Sunday Brought the Rain -Track 13-.

Coupled with their own songs Blue May -Track 2- (the B-side to Happy), A Year of Jaine Time - Track 4-, and I, To We, and Back Again - Track 14- -- it all combines to make a copious overview of an overlooked group.

What make The Sunshine Company so fascinating is really what they were fighting against and how they dealt with it. Starting out in folk circles (not unlike the Mamas and the Papas), they stumbled upon the song Happy after one failed attempt at the Jimmy Webb song Up, Up and Away (not included here - the 5th Dimension beat them with that one).

The song Happy was actually decidedly different than what the members of the Sunshine Company were all about - and in fact even their name was decided upon only after they were forced into the sunshine pop sound. Since Happy did fairly well nationally and even better locally in LA - their producer Joe Saraceno tried to pigeon-hole them into the flower power sunshine pop sound that was so hip at the time.

Thus, one ingredient has been added and we end up with one aspect of the Sunshine Company. The group, however, would try to put their own two-cents in by either picking a particular type of cover or even using self- penned tunes that have a decidedly more melancholy/folk rock sound to it.

Where the two sides of the group meet is often where the best songs are. Four in the Mornin' -Track 8- - a Jesse Colin Young song originally on his 1964 debut album - is a definitely down folk tune but with the added element of the electric fuzz of rock. Children Could Help Us Find the Way - Track 5-, while being somewhat of a novelty, works because of the stellar arrangement and vocals.

Another novelty tune which perhaps may not work as well is I Hate Pigeons in which the recording is cut off short - apparently because the group were fed up with novelty tunes and this is one of our few glimpses of the punk side of the Sunshine Co.

The feel behind It's Sunday -Track 11- was even borrowed heavily by Arling and Cameron on their 2000 release Music For Imaginary Films track W.E.E.K.E.N.D. What's great with this compilation is you can hear the band forming - finally coming into their own on the latter half of the disc (tracks 17-21 from the Sunshine and Shadows album - the perfect name for it too) - and while they have grown to be their own band they have lost most of what made them hit-worthy, that is the sunshine catchiness.

The sum of all these disparate parts is perhaps really what the 60s were all about. The only complaint is the missing tracks that could've been included which are Jimmy Webb's Up, Up, and Away, The Beatles' Rain, Curt Boettcher's I Just Want To Be Your Friend and the Youngbloods' Let's Get Together along with tracks from the mysteriously unreleased 4th album - but we can wait until the albums are re-released properly to hear these tracks.