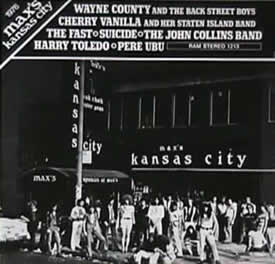 The songs on this CD are already hard wired into my head from countless listenings. Every single song from the original 1976 Ram Records Max's LP is golden.

The 'bonus tracks' are The Fast 'Kids Just Wanna Dance', Philip Rambow 'Night Out', The Terrorists (feat. John Collins) 'Fade Away' and The Brats 'First Rock Star On The Moon'.

Here's the dirt: Wayne County and the Back Street Boys were one of the many amazing bands dwelling in Manhattan at the time (Richard Hell and the Voidoids, The Ramones, Dead Boys, Blondie, The Dictators, Television, and countless others their peers). Three astounding tracks from him will show you that he was as good as any of the bands that 'made it'. He was just a lot harder to market at the time (unless you had a thing for the movie 'Whatever Happened To Baby Jane').

The Fast were like a speedy version of Sparks. Their three songs on this comp are top notch. Cherry Vanilla and her Staten Island Band were like the female Wayne County, only they didn't have the Dave Clark Five styled punch that Wayne had in his songs.

The John Collins Band were like NYC's Roxy Music. Their song 'The Man In Me' is as good as early Roxy. You already know Suicide's 'Rocket USA' and Pere Ubu's 'Final Solution'. Both were first heard by most people on the original issue of this comp.

Despite the strength of ALL the tracks, this comp will always belong to Wayne County to me. His song 'Flip Your Wig' has a part that's got to be heard where he talks about pigeons and starving people in India. The song is near perfect. As he says in the title track 'You better bring your masquerade and your ego trip, cos you're gonna NEED it'.

That's all that you need to read. Now make a point to HEAR these tracks pronto!