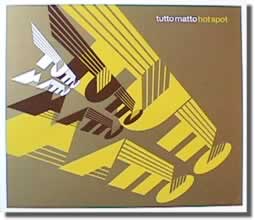 In 2000 Tutto Matto released their first full length 'Funkulo' on Tim Love Lee's Tummy Touch label. The sound was block party disco, and the look was camp. Funkalo's dayglo pink and yellow sleeve has photos of the pair dressed up in outfits that made me think of Soft Cell and Sparks.

Jurij Prette and Paolo Guglielmino are the Italian duo that make up Tutto Matto. Since they moved to London they have released ten 12inch singles and 2 full lengths on Tummy Touch, plus a 12inch on Phat Plastic and one on Voodoo. It seems like they are busy as their sound!

Hot Spots starts off with 'Stay Forever.' Stay Forever is one of the songs I don't like. The music has the kind of production gloss Nile Rodgers brought to Chic, but I don't like the vocal. It is too breathy for me, and it's way out front in the mix. 'My Mum Would Tell Me - lmf2' has simultaneous male/female vocals that sound like Funkadelic.

'Changes In Piano' is an instrumental that has a heavy Haircut 100 feel crossed with a touch of Carol Kings 'I Feel The Earth Move.' Sounds unholy? It actually works quite well, and is one of my favorite cuts on the disc.

'Peace' is another track I really don't like. I just don't like the piano or the vocal. ' 'I Love You More - lmf3' is a song I skip as well. It have a less bothersome version of the dramatic vocal Peace had.

The title song 'Hot Spot' is killer. There is a female vocalist who has a cool and sexy voice and the lyric "wanna see me blow, wanna see me go" to launch this stomper with a chorus that reminds me of Donna Summers 'Hot Stuff' and verses like the NYC band W.I.T.

'You' has the same vocalist as Hot Spot, and also reminds me of the band WIT (Whatever It Takes). 'You' is a killer track that will grind out any resistance to this record by people who have frowned upon the references I've cited in this review so far. 'My Little Star' is a song I don't care for. It is a breathy 4/4 track anchored by a nifty bass part, but low in energy as a whole.

Tutto Matto in the gullbuy: