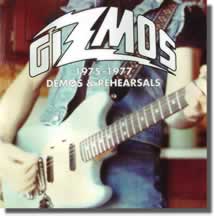 After most of the original Gizmos had gone their separate ways by early 1977, straggler Ted Niemic gathered up some new musicians to back him as the Gizmos. Soon, Niemic got the point and split too; the remaining folks keeping the name with Dale Lawrence taking over the vocal chores. (Post-Gizmos Lawrence went on to form the Vulgar Boatmen.) These demos were recorded shortly before the band finally called it a day, retiring the name for good. Of the seven tracks on this EP, only one -- "The Midwest Can Be Allright" -- appeared for public consumption (it was on the Red Snerts comp) prior to the 2001 release of this CD.

The band's sound on these tracks is far removed from the original Gizmo retardo-rock informed [over-informed?] by pop culture and packed to the brim with obscure references and in-jokes. If you manage, however, to forget their roots this is actually a pleasant record.

The basic sound is power pop, sometimes on the more rockin' side. Some tracks have a touch of rootsy country music flavor, like "Hard Hoboken Line" and "Biscuits & Gravy" for example, mixed in with the twangy Strat pop. Perhaps a name change and a move out West would have garnered the band more recognition from the "cow punk" scene that was just around the corner with bands like the Rave-Ups and such. Maybe Slash would have even signed them!??

While very much "of the time," these recordings have aged pretty well, not sounding nearly as dated as many bands from the same period do now. I would have to say that this CD was a really pleasant surprise for me.