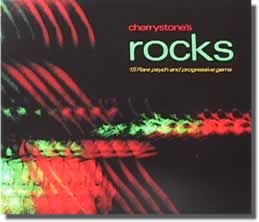 Cherrystone's Rocks is a compilation of favorite late 60s tunes chosen by Manchester's Gareth Goddard aka Cherrystones, who releases records on Twisted Nerve.

Along with Mum & Dad, Cherrystones are one of the artists who break the Twisted Nerve mold of off-kilter acoustic based rock. I have enjoyed the five song Cherrystones 12inch 'Remedies & Symphonies' since I first bought it in a year ago.

The compilation start's off with Pugh. Pugh are from Sweden, and their track 'Love, Love, Love' sounds a lot like the Italian band Modulo 1000.

'Speakin My Mind' by Taiconderoga has a really cool percussive accent which sounds like a lead pipe played as a cowbell. The song also has bongos and a slithering bass part which the up front vocal and soloing guitar wrap themselves around. The ending of the track is one mega guitar solo. Taiconderoga only released one single, and Gareth Goddard couldn't even find out where they were from.

Rolf and Joachim Kuhn and the Mad Rockers were free jazz rockers from East Germany. Their track 'Funny Bird' is an instrumental that sounds like a maddened Door's instrumental, with heavy organ and a neat guitar that almost sounds like it is put through a turkey baste vocoder.

'Sweet Movin' by Meck Mark Men (Sweden) is truly free jazz. The song starts off sounding like Jimi Hendrix (the sound of the voice). When the saxophone freakout starts you know you are somewhere else. Sweet Movin is a successful hybrid of a Hendrix cool vocal track and an out there instrumental freak.

'Almost Grown' by Great Bear has vocals that sound like Phil Lynott of Thin Lizzy. Though compiler Gareth Goddard was stumped trying to find out more about Great Bear, I found out that they were an American band after quizzing Wayne Rogers at Cambridge store/label Twisted Village. To Wayne this compilation was just a typical day in the store; not the first exposure to these artists that Cherrystone's Rocks will be to most of us.

Frijid Pink were a band from New York. Their track 'Crying Shame' reminds me of early Grand Funk Railroad. Heavy rock like a less skilled version of Eric Clapton, Jack Bruce, and Ginger Baker as Cream.

Speaking of Cream, Black Cat Bones 'QE2' sounds an awful lot like Cream. QE2 has a catchy vocal melody and some scorching music. Black Cat Bones were a British band that featured Roger Earl before he became well known as a guitarist in Foghat.

Rita Lee of Os Mutantes is up next, from one of the many solo records she released after the breakup of the Brazilian band Os Mutantes. Rita Lee's song 'Vamos Tratar Da Suade' has guitar in it that sounds very much like Bill Nelson in Be Bop Deluxe. Her song is the only one on Cherrystone's Rocks with female vocals.

Klaus Doldinger has a very hipster sounding instrumental called 'Back In The Dark.' The track is dominated by smoky organ and a guitar/sax doubling up for a sliding feel that works great in the track.

Austrian band Niagara (led by drummer Klaus Weiss) have a percussive instrumental 'City Walk.' While all manners of drums punctuate the proceedings, the walking is done by a slippery bass.

Hungarian band Illes play the track 'Nekem Sly Mindegy.' Illes has a sound kind of like the early Joe Walsh band James Gang. It is a tight funky rock with staccato riffs.

German band Sunbirds include Klaus Weiss, the drummer who fronted Niagara. Sunbird's track 'Sunrise' is an instrumental which makes use of a wah-wah petal on the guitar and jamming experimentation explored by live bands of that era.

The Mogol was a band from Turkey that also have releases as Mogallar (their name in Turkish). 'Sunset In Golden Horn' has another lead pipe percussion like Taiconderoga used on track two of this comp. The rhythm of Sunset In Golden Horn reminds me of the Love version of 'My Little Red Book.'

Cherrystone's Rocks closes with 'Karate' by Breakout. Karate is an instrumental with an upbeat feel and nice use of harmonica and shaker.

Cherrystone's Rocks is completely on a parallel universe from compilations of this style that are appearing left and right on store shelves. I'm glad that Gareth Goddard put it together, and that Lo Recordings released it.