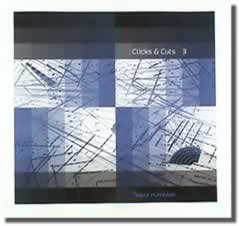 You definitely can't go wrong if you plan on dishing out for any of the Clicks and Cuts compilations. Clicks and Cuts 2 was my first exposure to this form of digital electronic music, and it packed a lot of punch over three cds (for a great price).

Clicks and Cuts 3 is another chock full batch of dig-glitch sounds, on a great priced 2-cd set. While neither set is incredible all of the way through, since so much music is up for offer for such a great price you're bound to be happy when you have hunted and pecked for your favorite tracks. I think this can be attributed to the fact that this genre was and is still in it's formative stage when being documented here. It's not like anyone has had a chance to really sift through it all yet and find the best stuff. The other thing is, since these compilations contain such a huge amount of styles put to the glitch test, it would be hard to please everyone all of the time. It's not like I found any of the songs bad, just that some of it seemed a little less than inspired.

For example starting out disc one, it takes awhile for a truly inspired track to appear. Track 3 Nerdy South by Andreas Tilliander is the first song on disc one to turn my head, with it's subtle electronic voice intoning what sounds like "group sex" to a broken beat and hovering bass components.

Really, it's not until the wonderful Geeez 'N' Gosh song (track 6) Kleine Hausmusik #16 that disc one kicks into high gear. Geeez 'N' Gosh glitch-esize rhythms with samples from gospel records, and as far-fetched as it sounds, this stuff really works. The end result is a post-apocalyptic spastic gospel revival, brilliantly executed. It helps a lot that our man Atom is the man behind Geeez 'N' Gosh.

Track 10 - Difusse Daten in 5 Min by Boris Polonski has a great build-up of rhythms of varying patterns, doubling, bouncing and echoing, which make it a favorite for me.

DAT Politics have always been very interesting to me, and they give us the quirky breakage of Bubble Queen (track 11) with all sorts of manipulated voices to a throbbing electro beat sounding like it could've been on a cd single or 12 inch with no problem. It's got enough variety and cut sections for it to fit here too.

Track 12 Migrade by Andy Derubertis is the last song on disc one and a great way to end with a really chill-out vibe, as the beats come and go but the rhythm stays bubbling under.

The reason to buy this compilation is the first song on disc two - the agf/dlay edit of Luomo's Melt will indeed make you melt, sublime tech-house with a remix dub vibe, laid back vocals, and an ebb and flow of tension for 9 and a half minutes.

Track 2, Lovers Inn by Antonelli Electr. keeps up the good vibe, with an upbeat tech-house track which bounces along with a perky but minimally pleasing beat.

Track 3 Onside by Mikael Stavöstrand and Track 4 Don't Quit Please by Swayzak are both more upbeat tech-house numbers, with a little less going for them, but they still have nice grooves going on.

Track 6, Box is another crucial track by Rechenzentrum which has a pulsing and manipulated orchestra for part of its rhythm.

Track 7 - Rhizome by Robin Judge has a subtle dub effect throughout. Pianos by Agf (track 8) is also another favorite highlight on disc two, with a female spoken voice talking about the effect the piano had on the world - a great track.

Mille Plateaux is an innovative label, giving us some great music in the clicks and cuts style. I found out about some great artists thanks to them, and I bet you will to. If nothing else, I would recommend checking out the Luomo track on disc two.