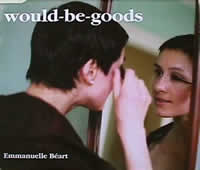 Even though painted as a band during their time spent as artists on the El Records roster, Would-Be-Goods have always really been Jessica Griffin's project.

This 4 track CD single comes almost 10 years after the last Would-Be-Goods recordings. I was scared that it would not live up to my expectations, as the recent Free Design 'Cosmic Peekaboo' CD failed to do.

To my delight 3 of the songs please me. The song I'm not crazy for is Je Leche Les Vitrines, a soft song sung in French. The other soft song, Everybody Wants My Baby is filled with imagery that I'd imagine Wendy singing in Peter Pan, charged with protecting the children in her care as they went through adventures galore.

The title song is written in honor the French actress Emmanuelle Beart , who played the exquisite strange girl in the film 'Manon Of the Spring'. It really is zippy and fun, exactly like I would have hoped Would-Be-Goods could sound in 2001.

The final song on the EP Words is another rocking song that works just fine for me. It's funny the timing that this CD arrived. I have been listening to Anita Harris's song Pushbike Song and thinking what a good cover it would be for Would-Be-Goods to do, so similar are the voices and feel of both artists. Anita Harris is a 60's English artist who sung songs for children. Pushbike Song is on the Castle Music comp 'Those Pesky Kids'.