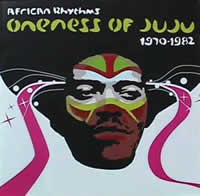 Oneness Of Juju was a US band fronted by Plunky Branch, a Virginia native who went to Columbia U. to study Chemistry, then moved to SF when he deserted the army in 1967 and became a fugitive.

In SF he learned about African music, and the jazz he had been playing moved towards putting a backbeat on Afro-Cuban rhythms.

Plunky played saxes, flute, and percussion. Following the lure of a NYC music festival gig, the band went to NYC where Plunky was arrested, did his 30 days, and put the whole 'fugitive' thing behind him. The band stayed in NY and lived in poverty in the lower east side as their reputation grew, along with feelings of black nationalism in the wake of the civil rights movement.

When I listen to any of the tracks I can tell that it must have been something to have been a fan when this was happening.