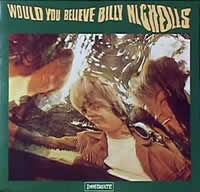 A 60s supergroup effort never truly officially released when it was recorded in 1968, this cd makes an interesting addition to the Immediate Records family of music and is a lost classic of British pop music.

For fans of Small Faces, Beach Boys or the Kinks I think there is plenty to enjoy offered up by the 18 year old Billy Nichols, who wrote all his own material on this cd.

Along for the ride are such luminaries as Steve Marriott and Ronnie Lane (both of Small Faces), Big Jim Sullivan, Caleb Quaye (both studio henchmen who played on many British 60s recordings), Nicky Hopkins (piano sideman for the Rolling Stones and prominently on display throughout this disc) and John Paul Jones (bass player of Led Zeppelin).

Originally produced by Andrew Loog Oldham (who had started the Immediate label), it was intended as the British answer to the Beach Boy's 'Pet Sounds' album. The final lp was shelved after only one proper single and a handful of promotional LP copies were sent out - and to this day it has remained a collector's item fetching up to 1500 pounds.

So what do we end up with - 30 plus years later? We end up with a definite 60s curosity; a classic by virtue of its unreleased status for so many years - a flawed but fascinating slab of 60s pop. The album doesn't reach the realm of Pet Sounds - it's far too baroque and twee. But it definitely is a remarkable album and is better than many albums that were released. I would put it along side of the Sagittarius album 'Present Tense.'

The added strings - the intent was to fill out the sound - sometimes weigh down the songs. There are also far too few hard rock numbers - check out track 11 Girl From New York for some awesome fuzz guitar by Steve Marriott. I could have used more of that.

The best track remains the single which was officially released - Billy Nicholl's fist single in late 1967 - Would You Believe? a pure piece of Brit Pop if there ever was one. Check out Steve Marriott's prominent, distinct background vocal on this one; the catchiest tune on the disc, I'm sure you will be humming along.

I guess we'll never know why this fine record was shelved in the day, but I was certainly glad to be able to finally give it a listen. And I think after further listens I will grow to really love this album.