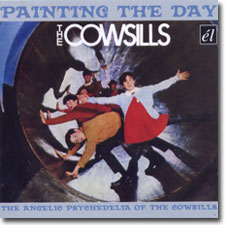 The Cowsills were the local inspiration behind the tv show The Partridge Family, and were in fact a real family group from Newport, RI filled with brothers, sisters, and their mother, singing and playing their own music.

They blended harmonies not unlike the Beach Boys and Mamas and Papas, crossed with whatever influenced the group throughout the late 1960s. Sadly, though their story is marred by one tragedy after another, including the fact that they were originally slated to have their own tv show, but were later replaced with actors in The Partridge Family, and both Barry and Billy Cowsill recently died within a few months of each other only in their 50s. On top of that, The Cowsills recording output has been woefully neglected in the cd age, with only a few Best ofs and albums reissued well over a decade ago that are now as rare as some of their original lps.

El Records out of the UK has been reissuing similar releases recently like the HR Pufnstuf soundtrack and The Bugaloos, and Painting the Day: The Angelic Psychedelia of the Cowsills collects together the entire II x II album from 1970 - that has never been reissued on cd before - with their hits, and a few other select tracks. It's a must for those who love the sunshine and harmony pop from the 1960s, though it should be noted that II x II is from after their heyday of hits.

This collection is somewhat deceptive in that it doesn't span the entire Cowsills output but instead features the entire II x II album along with their 60s hits. Their hits included The Rain, the Park and Other Things (a glistening Beach Boys meets Mamas and Papas styled number), We Can Fly (a floating gem of sunshine pop), Indian Lake (a bubblegum tune with that out in the country vibe and more Beach Boys harmony), and their cover of the theme song from the musical Hair.

A handful of other tracks have been added too to flesh out the cd, including

The Cowsills sang the theme song for the first season of the tv show Love American Style - it was produced by Wes Farrell, the man behind The Partridge Family and The Rock Flowers - and arranged by Tony Romeo, the guy who wrote many songs for The Partridge Family.

The theme song was later performed by the Charles Fox Singers in later seasons because Charles Fox co-wrote the song. And oddly enough, in syndication, The Cowsills' version was removed from the first season episodes probably for copyright reasons.

The II x II album has a different sound than the early Cowsills sound. It's a more 1970 rock (both hard and soft) sound than 60s sunshine pop or psychedelia. The songs II x II, Signs, and Anything Changes have a more rocking sound to them. Really nice slices of soft rock can be heard in Goodtime Charlie and Father, but the best is the Prophecy Of Daniel And John The Divine (Six-Six-Six) where The Cowsill sing lyrics with religious overtones like "Six is the number (six), Six is the number of a man, Six, six, six".

El has done a fine job here, but one wonders if there's more on the early Cowsills albums which would've made this compilation more psychedelic than much of the tunes from II x II.