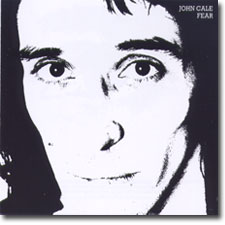 Brought up in Wales, John Cale was a stately performer, kind of like an underground Steed (Patrick MacNee) from the 60s TV show The Avengers.

John Cale plays bass, cello, piano and vocals. His music is like a melding of Robert Wyatt with Roy Wood. Many of his songs are paino/vocal tracks with embellishments, though others are rock tracks that go far out on the edge - tracks that Patti Smith was surely listening to when she first started Patti Smith Group.

In 1974 Fear was released. It was John Cale's second solo album after his career in Velvet Underground. It was a long-time-coming follow-up to his 1970 solo debut Vintage Violence.

The album opens with Fear Is a Man's Best Friend, probably the best song on the record. The song is so fully realized that you don't want to change a thing more than 30 years later.

Barracuda is a shuffling rock track with guitar embellishments with dissonant homemade chords like Robert Quine used to play for Richard Hell & the Voidoids.

Gun has open chords like Vic Goddard played on the B-side of the first Subway Sect single Don't Split It. Gun is surely another John Cale classic. Many of the songs are soft, featuring John on piano and vocals.

The record closes with Momamma Scuba, which kind of sounds like a dry run for the epic version of Heartbreak Hotel he recorded on his next LP. 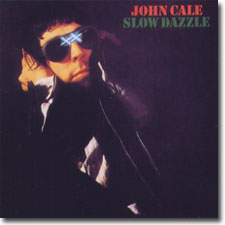 John Cale's third record, Slow Dazzle, was released in 1975. The record featured a towering, scary, cover of Elvis Presley's Heartbreak Hotel. In Cale's hands the song changes from a lonely lament to a harrowing torment.

The record opens with Mr. Wilson, a song about Brian Wilson

I believe you Mr. Wilson, I believe you anyway, and I'm always thinking of you, when I hear your music play, and you know all thats true, that friends are not like California in any way, and when I listen to your music you're still thousands of miles away. Take your mixes, watch your mixture, add some music to our day, don't believe the things they tell you, don't let them get in your way.

A track like Taking It All Away could just as easily have been written by Steve Harley (& Cockney Rebel) as John Cale, with lyrics that tell a story and nice melody and backing vocals,The last track on the LP is The Jeweller. You can't really call it a song: The Jeweller is a story with music backing the narrator.

John Cale is a singular artist. His work is not really like anyone else. He never achieved any kind of popularity despite touring with all the iconic bands of the punk era (he played between Television and Patti Smith Group at her 1976 annual Birthday/New Year's show at the Beacon Theater). His best tracks were compiled on a US record called Guts which was every-song-a-winner.

Despite all theses things he is most remembered as the bassist of the Velvet Underground, and an eccentric who lives on a steamboat in England.