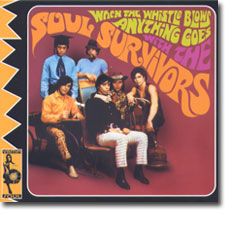 The Soul Survivors one big hit was Expressway (To Your Heart) from 1967, an early Kenny Gamble/Leon Huff song which has been compiled on many compilations including the box set Beg Scream & Shout: The Big Ol' Box of '60s Soul and the compilation Philly Sound: Kenny Gamble, Leon Huff and the Story of Brotherly Love.

When the Whistle Blows Anything Goes, The Soul Survivors first album, was originally reissued on Collectables in 1994 with 4 bonus tracks as Expressway to Your Heart, but has now been reissued under its original title by Vampi Soul, with the same 4 bonus tracks. There are a few moments where the original master tapes seem to have some degradation, usually during the quiter moments, but overall the sound quality is good.

The Soul Survivors also slow down a bit for another Sam Cooke cover, of A Change Is Gonna Come. They don't slow down often though, also offering up sweet sounding covers of James Brown's Please, Please, Please, Aretha Franklin's Respect, and Donovan's Hey Gyp. The only time the album careens into shady territory is on the two Soul Survivors originals, the slower soul walk of Dathon's Theme, the oddly percussive Taboo-India (both of which sound like soundtrack tunes), and the Gamble/Huff penned oddity The Rydle which ends the album on a sour note as the group perform a take on the traditional I Gave My Love A Cherry tune. But really the centerpiece of this album is the fantastic Expressway (To Your Heart), which combines together so many great aspects to create a song that will stick in your head in a good way.