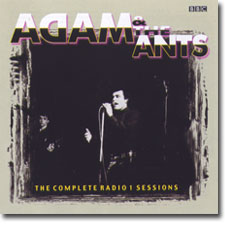 Adam Ant is Stuart Goddard, a graphic design graduate of Hornsey School of Art, who re-invented himself as a "pirate / dandy highwayman / Apache" and led the UK into the New Romantic era with his band Adam & The Ants.

The Complete Radio 1 Sessions compiles four sessions he recorded for the BBC. The first four songs were recorded on January 23 1978 for John Peel.

Deutscher Girls includes lyrics that were eventually removed ('...so why did you have to be so Nazi?'). Puerto-Rican has a riff like Clash City Rockers, which makes it an upbeat punk rock track. It Doesn't Matter is a pretty good track with a pub rock feel. Lou has somewhat annoying tuneless screamed female vocals from Jordan, who is most remembered as the girl who carved the f-word onto Adams' back with her nails. The scar has made it that he could never appear in the media topless again.

The second four tracks are from a July 10 1978 session recorded for John Peel. The band is the same as the first session except guitarist Johnny Bivouac was replaced by Matthew Ashman, who brought a slowed-down AC/DC sound to the band.

You're So Physical is a good track, even though the speed sounds very slow. Cleopatra sounds even slower. The song is about oral sex technique. Friends is an OK track and has a bit more life than the other tracks, though the song itself is less distinctive. Zerox (which would later be a single) starts off sounding almost exactly like Sex Pistols' Pretty Vacant. Zerox does become a great song on its own, and is my favorite track on the CD.

Tracks 9-12 are from a March 26 1970 John Peel session. This session contains the most sophisticated arrangements on the disc. Ligotage sounds a lot like the band Fashion, and is my favorite from this session. Animals and Men (which sounds like it should have been title 'Futurist Manifesto') is the fastest song on the CD and is a pretty interesting song as well. Never Trust a Man (With Egg on His Face) has minor chords that make it sound like a Monochrome Set song, though it too is a very interesting song.

The final 3 songs on the disc are from an acoustic set recorded for Simon Mayo on January 13 1995, sixteen year after the previous session. The session includes his classic track Antmusic, but all the signature sounds that made the original so much fun are nowhere to be found. Wonderful sounds like a blend of David Bowie Changes and the Dylan song Lay Lady Lay. It is my favorite song in the session. Wonderful has quite a different sound than he had recorded in the past, but performed as it is with passion and sincerity, it works well.

This CD has some interesting moments, but overall is not as exciting as I had hoped. I would not recommend buying it unless you really love Adam & The Ants.