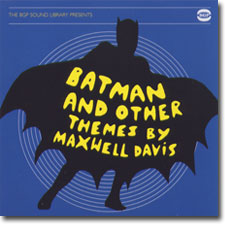 All great musicians have their high points and their low points in their career. Maxwell Davis had a high point when he played sax for the likes of Louis Jordan, B.B. King, Elmore James, Lightnin' Hopkins, and T-Bone Walker.

One of his low points must have been when he recorded the Batman Theme and Other Bat Songs album in 1966. Originally released in the UK and USA on the Crown and Ember labels, respectively, Ace Records out of the UK has started up a new subsidiary label called BGP Sound Library to reissue this album as Batman and Other Themes plus 3 bonus tracks (both original album covers are included which include the nifty Batman inspired look, along with a new cd cover).

Ace Records has previously spotlighted Maxwell Davis' work on their Father of West Coast R & B compilation. Sadly, for this prolific but not so well known by the masses sideman who played on and arranged many great releases, this Batman cash-in record was the only one credited to him.

There were many Batman cash-in records in 1966 (Sun Ra even appeared on one called Batman and Robin - The Sensational Guitars of Dan & Dale which has since been reissued under his name). As far as cash-in records, this one isn't terribly bad, but it's not insanely inspiring either. Organ led groovers with brassy arrangements and guitar riffs like Batman (of course, since the theme as written by Neil Hefti is performed), Mission Impossible (Lotta Trouble), and These Boots Are Made for Walkin' (Good Guy) fill up this album, and are fun to listen to. But, it's not like you'll want to hear the entire album all the way through in one sitting.

Interestingly, the first two bonus tracks sound more realized than the Batman album. The first two are from a Herb Alpert cash-in album by The Mexicali Brass that Maxwell Davis arranged and appeared on. The Green Hornet Theme (the Al Hirt tune) is given the Maxwell Davis treatment with a tense rhythm, and an organ sound and melody mimicking the sound of the Green Hornet. Tijuana Harlem is a more blues based track combining the Harlem blues sound and the Tijuana Brass sound for a true blue stomper. I wonder why more of this album wasn't included here.

The final bonus track is actually an unreleased version of Ennio Morricone's The Good the Bad and the Ugly (the theme from the Western) which has an unfinished quality to it because of the lack of production value and shaky horn playing.