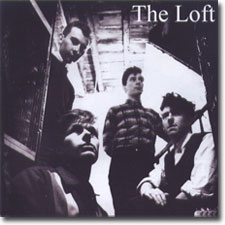 The Loft were Pete Astors' band before The Weather Prophets in the early 80s. They followed the heyday of Postcard Records and created a pop sound that could be looked at as the forerunner of indie pop.

The band was doomed to the fate of breaking up during a gig after releasing one 7inch and a 12inch EP that many of us loved.

Bass player Bill Prince and guitarist Andy Strickland were already know to some as rock writers. Drummer Dave Morgan was just a kid that met and admired Pete Astor and ended up in a band with him. Pete Astor was the writer of the songs, and played guitar and sang. It was his creative juices that spurred the equally creative parts the other band members crafted for The Loft's songs.

Pete Astor remained a presence in music through his work in the late 90s - early 2000s as The Wisdom of Harry and Ellis Island Sound.

Why Does The Rain: This song is classic, pure and simple. Anyone who heard it in the 80s became a fan of The Loft. The first notes might have been Jackson Browne before he opened his mouth to sing "I'm a runnin' down the road, tryin' to loosen my load" in Take It Easy. The poor production ("poor" is a relative judgement - most Billy Childish studio recordings have way worse production than this) adds a certain charm or innocence of the track.

Up the Hill and Down the Slope: The band admitted a love for Tom Verlaine and Television, but this song shows their (also admitted) love for Josef K. The jangling guitars and trebly dissonance are like a dash of hot sauce on an already great song.

Winter: The vocal harmonizing could remind you of Simon and Garfunkel. The music might remind you of a looser Byrds.The Loft were not afraid to write the songs they wanted to, without coloring their hues to the beat of the moment. Winter tugs the heart just as strongly as Why Does The Rain, which Winter was the B-side to.

Time: My the time Richard Hell's second album Destiny Street came out in 1982 (5 years after his debut!), much of the dream of NYC underground punk was over. Time was a sensitive song, and The Loft make it their own so effectively that it is hard to tell that they did not write it.

There are some incredible songs on this CD, and it is one of the better Rev-Ola discs in my opinion. It is hard to believe that this band released so little material. The 14 tracks on this disc (4 of the live) pretty much sum up all recordings out there from The Loft.

Pete Astor in the gullbuy: