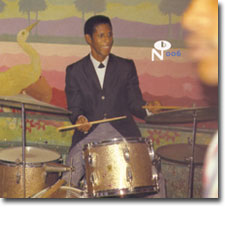 The Chicago-based label The Numero Group is up there with LTM, for its recent reissues that have really dug the crates for some astounding finds. Just in the past year or so, The Numero Group has given us two fine rare soul collections in their Eccentric Soul series spotlighting the Bandit Label and the Capsoul Label, a 2 cd set of power pop called Yellow Pills: Prefill and the reissue of Antena's electro-samba album Camino Del Sol. But one of the best of them all, has to be the incredible goldmine that is found on Cult Cargo: Belize City Boil Up.

Cult Cargo: Belize City Boil Up collects together some reggae, calypso and funky soul sides recorded between 1967 and 1980 for the little known Contemporary Electronic Systems (CES), a label from the South American country of Belize. Similar to how the recent hurricanes like Katrina have sent the people of New Orleans throughout our country, back in the early '60s, Hurricane Hattie devastated the country of Belize, sending their musicians stateside for refuge. What they learned here was captured in the studio and released on labels like CES, hidden back in Belize or on collectible 45s, with an astounding end result, compiled here for the first time. Like a stew boiling over, The Numero Group has collected together the best right here.

The collection features hardhitting disco, soul breaks and smooth reggae sides from Lord Rhaburn, an all around everyman and star of Belize; the sweet harmonies of The Harmonettes; the latin soul and reggae of The Professionals; the organ drenched Motown inspired blues of The Web; the funkiness of The Soul Creations; and the mellow female calypso folk vocal style from Nadia Cattouse.

Lord Rhaburn is all over the place. Disco Connection starts the compilation with a hardhitting disco-fied backbeat instrumental track for one of the best cuts here. More Love Reggae is an inspiring reggae track. He also does a soul drenched grunting version of Wilson Pickett's Don't Fight It, while Boogaloo a La Chuck sounds like a lost Stax/Volt instrumental with searing electric guitar and measured hornlines.

The Harmonettes do a cover of Johnny Nash's You Can't Go Halfway, reggae style. They also do a soulful version of the disco hit Shame, Shame, Shame by Shirley and Company.

The Professionals are heard with Jesus Acosta on his latin inspired Guajida, with some funky chorus vocal and trumpet soloing. The Professionals take a more mellow route on A Part of Being With You, while their cover of The O'Jays Back Stabbers is reggae-fied almost beyond recognition. But there real highlight is their searing cover of Nina Rota's Theme from the Godfather, which is one of the best things I've heard in a long time with its fuzz guitar and sweeping organ solo melody.

The Web's The Same Old Me is sort of off key, but their Things Are Going to Work sounds much better, with a gospel soul sound. Their best track is the reggae track, Rated G which has a sweet ska vibe going for it.

We're treated to both parts of The Soul Creations' Funky Jive, for some reason starting with the 2nd part first. It sounds like novelty instrumental soul with a voiceover saying things like "It's outa sight" and some fine horn solos in a 70s Miles Davis meets Stax/Volt kind of way.

Numero Group in the gullbuy: