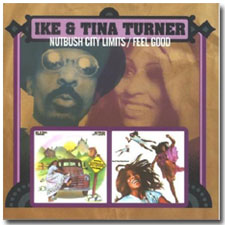 Working together since 1960, Ike & Tina Turner signed with Liberty/United Artists in 1970, recording a series of hit worthy rock'n'roll covers including The Beatles' Come Together, Sly & the Family Stone's I Want to Take You Higher, and Creedence Clearwater Revival's Proud Mary. The Australian Raven label has reissued the last two Ike & Tina albums that followed up these hits on one disc, Feel Good (1972) and Nutbush City Limits (1973) with bonus tracks.

These two albums are filled with Turner originals like Nutbush City Limits (the best of them, which was later covered by Bob Seger) in its single version and an extended version. The Turner originals have a raw, emotional depth to them that counter balances the down home gritty feel of the music. Songs like Fancy Annie and Black Coffee are good examples of this. The title track of Feel Good has an amazing groove, and call and response vocals between Tina and her background singers.

The covers work well too because Ike & Tina brought such a gritty sound to anything they recorded around this time, often transforming simple songs into emotionally charged show stopping numbers. They re-do the Phil Spector song River Deep, Mountain High (which Ike & Tina originally recorded with Spector in 1966), removing the giant wall of sound of the original and replacing it with a down home boogie n' funky quality. They also do an amazing cover of The Beatles' She Came in Through the Bathroom Window, transforming it into a gritty showcase for Tina's howling vocals.

The bonus cuts are a nice addition, and include a smattering of tracks from other Ike/Tina albums from the early 70s and Tina's solo take on The Who's I Can See for Miles from her second solo album, a cash-in that accompanied her acting debut playing the Acid Queen in the movie version of The Who's Tommy in 1975.