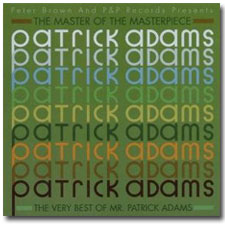 Amazingly this 2 cd compilation is the first dedicated to the expansive musical catalog of Patrick Adams, a behinds the scenes producer, arranger, and songwriter you may not have heard of if you don't bother reading the credits on album covers. And even more amazing, it barely scrapes the surface, but it still includes much music even Patrick Adams' fans may not have heard yet.

Patrick Adams career goes way back to the late 60s with stints in the movie Up The Down Staircase (the 1967 Warner Brothers movie starring Sandy Dennis), and writing songs for Sesame Street. Things really kicked into gear when he became the vice president of A&R at Perception/Today Records, where he worked with Astrud Gilberto (who released an album on Perception, that Patrick Adams played bass on) and Black Ivory, a Jackson Five styled vocal group who have two stellar tracks that start out this compilation.

Black Ivory featured Leroy Burgess, an incredibly influential talent who is another behind the scenes guy you won't know if you don't bother looking at the credits on the records. The two Black Ivory tracks here are great Jackson Five/Temptations sounding tunes (Surrender and I Keep Asking You Questions).

Burgess was influential with the disco, boogie, and house music crowd. He also has cd compilations spanning his works (Leroy Burgess: Anthology Volume 1: The Voice and Volume 2: The Producer).

Jocelyn Brown was also a singer with Musique, whose In the Bush and Keep on Jumpin' are the centerpieces of disc two.

When Patrick Adams teamed up with Peter Brown to start their own label called P&P, they released records by a studio group called Cloud One. Peter Brown eventually co-wrote Material Girl for Madonna, but he started out in his own bedroom studio recording for the TK subsidiary label Drive Records (Do Ya Wanna Get Funky With Me?). Whatever was brewing in the P&P studios, the results that was Cloud One are some mystifying and blissful grooving workouts with flying synth solos and miminal female vocals (Atmosphere Strut Remix 1979 and Flying High are heard here).