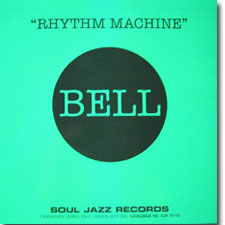 Though Soul Jazz is a label known for reissues, they also have put out quality new music in the last few years.

The first new band I noticed on Soul Jazz were Sand. They put out an album and 12inch that were very good. They reminded me of This Heat and Laddio Bolocko a bit.

Soul Jazz also has the Microsolutions for Mega Problems series for electronic dance music. This 12inch is not part of that series, though it has similar graphics to the 12inch singles by Kit Clayton and Sutekh.

Bell are the duo Dan Crouch and Adrian Stephens. They have released two records that were worth more notice than they received.Bell are like an English equivalent to the Berlin band Smash TV. I think Bell's second record Seven Types Of Six (which this 12ich was taken from) was even better than Smash TV's second disc.

Since this 12inch Bell have released two singles:

Rhythm Machine has computer treated vocals saying rhythm, with another voice answering machine . Though many artists have used such vocals, this track does not sound tired or typical. The beat is so up that you can't help but tap along with the track