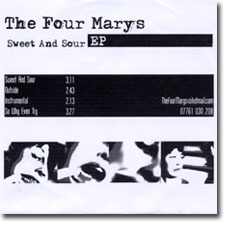 Sweet and Sour is my favorite song that Christianne, the voice of Pale Man Made and Shook Yang, has ever recorded.

The Four Marys have a rocking sound that reminds me of The Action Time, the Yeah Yeah Yeahs, or Tara Jane O'Neill's 1993 post-Rodan band Drinking Women.

The bass playing has that simple notes played powerfully sound that Arthur" Killer" Kane used in New York Dolls, which Jah Wobble carried on with in PIL.

The drums thrash with lots of cymbal washes, and the guitar cuts through the sound with lots of loose around the edges licks.

As in the past, Christianne's flat voice works better than a trained voice, as it sounds real. I like my rock odd, and her voice is something different than you usually hear.

Above all the band sounds like it believes in what it is playing, and is having fun playing the songs.

Outside is almost as good as Sweet and Sour. Like that other track, the backing vocal goes over the top, which provides a nice balance to the main voice.

Instrumental is a song that could easily have had vocals, but the sing-song guitar and clapping hands (as in The Stooges Real Cool Time) fill up the track quite well without any words.

So Why Even Try is my least favorite track, though it is not bad at all. I'm just not crazy for the music, and a sentiment like "why even try" is almost alien to me. My world requires constant effort to even keep up where I am at, much less move ahead! The lyrics are being ironic ("I don't have the money to, so why even try"), but I still don't like the riff the song is based on.

Pale Man Made in the gullbuy:

Shook Yang in the gullbuy: