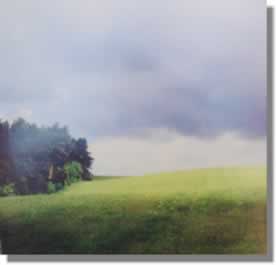 Barbara Morgenstern continues to grow on me with each an every listen - and my interest has risen triple-fold with the Eine Verabredung 10' record which contains 5 instrumental tracks and new mixes.

A lot of these tracks have seen compilation action (especially Dr. Mr.) but none of this means over exposure - it just means more of a chance to understand and get to know the Barbara Morgenstern sound.

She is able to combine a low-fi aesthetic with covertly complex arrangements - and she pretty much does it seamlessly, and unexpectedly haunts me with each of these instrumentals. The end result is - after many listens you are only left wanting more - I am in no way sick of any of these tracks and I've lived with this record for over a month now.

My favorite tracks at the moment have to include 3.37 (last track on side A) with the slapping rhythms fighting it out in the echo and Der Wunsch Teil Vier (last track on side B) an extended piece (at 9 and a half minutes). Der Wunsch Teil Vier is the highlight of this 10 inch record for me, reminding me of the dub-side of Echoboy, but a lot more haunting acoustically - it starts out with an extended pulsing introduction with a piano softly plucked and quiet buzz and clicks. It's not until the 4 minute mark that a steady slightly funky rhythm appears, and the piano becomes more pronounced, distorting and echoing ever so much to fine affect. The rhythm starts to dub out and the pulsing builds.....to conclusion, and the wanting of more.