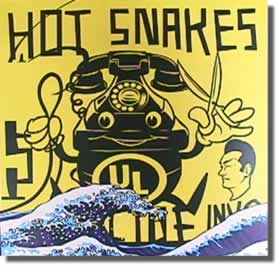 So Rick Froberg (a.k.a. Rick Fork) and John Reis were both in these bands called Pitchfork and Drive Like Jehu. Somewhere along the way Reis ('Speedo' to some) found the time to form a band for hissown self to front (tired of playing second banana to Froberg's top dawg) called Rocket from the Crypt. He also had a few other side projects with various names but we're not going to get into that here. Anyways, some time after the demise of Drive Like Jehu our heroes found theirselves making a joyful noise unto the Lord yet once again. And the name this time out was Hot Snakes. They released a beaut of a debut in 2000 called 'Automatic Midnight' on the everlovin' Sympathy for the Record Industry label (a reissue is imminent).

Their sophomore effort is, if possible, more compelling even than 'Automatic Midnight.' Some of the stuff hits you like a kick in the mouth, knocking your teeth down your throat for you to choke on. I hear the occasional Stoogism (but no tribute band, them). Really great angular artsy rock with waaay more emphasis on ROCK than art (tho we ain't talkin' r-a-w-k rock). Please believe me, this is not music to sip absinthe to, nor does it really fit in with the Providence art-noise crowd for you see, there are actual SONGS included here.

I don't even know what else to say I'm digging so hard on these tunes. Some of the ass-kickinest numbers include 'Bye Nancy Boy,' 'Who Died,' 'Why Does It Hurt,' 'XOX,' 'Paid in Cigarettes' and 'Unlisted.' Play the whole record, though -- it's all stupendous. If I were emperor of the world (and believe me, I'm working on it) this record would be #1 with a bullet in the head of record execs everywhere.

If this record does not receive massive airplay on our favorite college radio station here in Boston (that's WZBC for those of you without a clue) I swear I am giving up on you people.