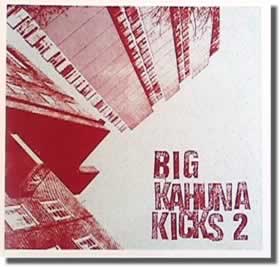 FC Kahuna were masters of the compilation via their label Kahuna Cuts before they released their first full-length this year, and it took them two years to followup Big Kahuna Kicks One due to the fact that all of the groups on Kahuna Cuts were working on albums at the time.

Big Kahuna Kicks Two was originally released in 2000, and spotlights Kahuna Cuts artists such as El Destructo (who have an album out on Kahuna Cuts called Chunkblower from '98), Language Lab (with two albums called Re Caffeinate and Burning Disaster from '99), Fuselage (who have two releases called (Don't Stop) You're Killing Me and Put Your Foot Down EP from '98), Kilo (aka Seanie B, who has a release called No Backup from '98) and Fc Kahuna themselves (track 4, Mind Set To Cycle eventually showed up on Machine Says Yes from '02).

Interestingly, this compilation has a similar feel and setup to Fc Kahuna's album Machines Say Yes, though there is definitely more variety between the groups. The setup is similar, however, in the flow of the cd: track 1 starts us out slowly, a slower track midway through the set, and ending with a slower track).

I'd like to check out the full length or singles by Language Lab.
Track 7 Burning Disaster has some cinematic guitar, a can't stop rhythm and tense chorus vocal (would love to hear the full vocal).
Track 10 Day Desire Dissolved is a fine dub to end the set reminding me of Saint Etienne's foray into that sound.
Also perking my interest is track 5 Almost Monday Morning by Fuselage which also reminds me of Saint Etienne's funky Filthy.

In fact there was only one track I was not crazy about - track 8 Day One by Kilo (Ft Izi) which is somewhat of a typical pop song, but it even gets a groove going.