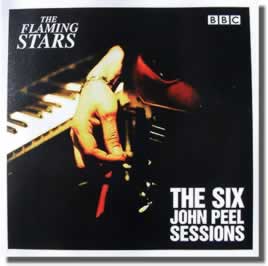 The Flaming Stars more often than not get classed as a garage band but I propose a new subgenre to give a better idea of what they sound like: Noir Garage. Yes, they rock out at times and yes, they record at London's (im)famous Toe Rag Studios (home to Billy Childish and the like) but they also positively DRIP atmosphere. Lots of songs about bars (and bar room floors), bad women and hard-luck men. Singer/songwriter Max Décharné is also a published author, so his lyrics are perhaps a bit more literate and accomplished than many others mining a similar vein.

Since their first release in 1995, The Flaming Stars have appeared on John Peel's radio show no fewer than seven times, recordings from the first six of which are compiled herein. Since the band primarily records their albums live in the studio, the sound of their live radio sessions is not very far removed from their regular output. There are only two previously unreleased tracks, one a cover of the Buzzcocks' 'What Do I Get?,' but in spite of that this is a really good collection considering it's a two disc set for single album price.

Musically they have more in common with the pre-British invasion rock and pop of the late '50s/early '60s; tracks like 'Just How It Feels' would not be out of place as a slow-dance number in a period film. There are also rollicking uptempo numbers ('Like Trash,' 'The Street That Never Closes' and 'Just Too Bad' for example), moody rockers ('Lit Up Like a Christmas Tree,' 'Forget My Name,' and a cover of the Moonlighters' 'Broken Heart') and a handful of instrumentals ('Who's Out There?' and 'Coffin Ed & Grave Digger Jones' are spooky!) 27 tracks in all.

Décharné's latest book, Straight from the Fridge, Dad: A Dictionary of Hipster Slang [ view this book on Amazon]