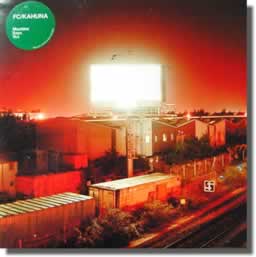 If you are like me and somewhat bored with groups who find a sound only to drill it into the ground, putting out albums which don't match the exciting singles simply because the albums end up being a one trick pony, than you will also be like me and savor the FC/Kahuna album Machine Says Yes. Talk about genre-hopping, this albums is all over the map, but FC/Kahuna get everything so right, no matter what they are doing, that it is safe to say that this is certainly one of the best albums of this year, if not of the past couple of years.

1. Fear of Guitars - starts us out on a somber prog-rock vibe somewhat reminiscent of Radiohead or Babybird - with its gentle pulsating keyboard and its radio-enhanced vocals, which leads into a strummed guitar segment. It's almost like a two part song thanks to the changeup from keyboards to guitars.

2. Glitterball - Deceptively mellow as it is mixed with the first track, this song has an Orb feel to it with its pulsating keyboard introduction, but soon enough a pounding beat joins us and send this instrumental into overdrive. Here's where we first get a hint of FC/Kahuna's masterful use of samples - about 5 minutes into this 6 minute track - perfection.

3. Machine Says Yes - This song (which was also featured on the Tech-Pop cd previously reviewed in the Gull Buy) has so much going on in the first few seconds - totally thrilling rhythms abound - in this trippy infectious breakdown with a sweet female vocal come-on by Hafdis Huld (formerly of Gus Gus) and straight away this song is a favorite - it combines a raunchy funky beat with sassy but sweet vocals.

4. Growler - This track is interesting because it has a slow build-up, and even has an over the top house sample but the track chooses to stay in its slow seething pulse and never breaks the mold. I love it for that reason.

6. Bleep Freak - a short electro track which reminds me of Caberet Voltaire or Herbie Hancock, with the Bleep Freak computerized vocal.

7. Hayling - a change of pace midset with this downbeat number - with vocals by Hafdis Huld - subtly computerized, dreamy, never seems out of place even at 7 minutes long.

8. Mindset to Cycle - The addictive dance rhythms return in full force on this instrumental, with another deeper than deep bass driving relentlessly, pulsingly. The broken shards of keyboards added to the spiraling melody are just the right touch.

9. Microcuts - 'Can't Stop Now' they say on this throbbing tribal number. And seemingly FC/Kahuna can't stop as things just keep getting better on this electro-inspired number.

10. North Pole Transmission - ending on a somber note with a surprising vocal track sung by Eileen Rose - it's a more soulful vocal with a gentle electronica backing. A perfect ending for a perfect album!