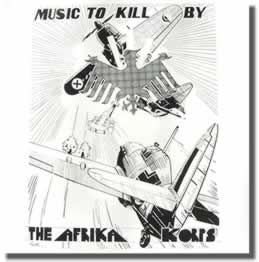 After meeting the double handful of people making up DC's nascent punk scene (this was 1976, after all), a band was formed and a record recorded. (This is the short version of the story; see the liner notes for the complete dope.) People on the record include members of The Slickee Boys, O. Rex, The Look, and Urban Verbs. It was released (in 1977) in an edition of 2000 copies, which may have seemed like a lot to them at the time but later when I was trying to track down one (as a massive Slickee Boys fan (and to a lesser extent, Gizmos fan)) it made finding it a bit of a task. (In case you care -- even if you don't -- I never found a copy. I did score the great follow-up record by The Korps, a stripped down version of the band, to be issued on CD later this year). This CD includes the 22 songs from the original Afrika Korps LP plus an additional 12 live tracks and outtakes.

Enough background. This record is a weird mix of punky rock, and '60s-influenced pop. Well, weird if you're not familiar with the Gizmos and early Slickee Boys. If you ARE familiar with those bands, you have a pretty good idea what's up. (Also figuring in a big way are New Yorkers Solomon (guitar and vocals and lots of the songwriting) and Jay Gruberger (bass).) Slickee Martha Hull sings on many of the songs that Highland or Gruberger don't (and soon-to-be Slickee Howard Wuelfing sings with her sometimes, replicating (or would that be PRE-replicating?) the Slickees' sound circa '77 (c.f. Mersey Mersey Me)).

'Jailbait Janet' (written by Kenne) -- I know this one from the Slickee Boys version but this is the original (See pictures of the real Jailbait Janet here [ view pictures]. The recording's a little uneven, but I think the greatness of the song shines through).

'Make Her Know (She's Getting Laid)' is filthy fun in the Gizmos' style. 'Wild Mouse' is latecomer Ken Kaiser's sole songwriting credit on this album and is only about 40 seconds long but is really swell. 15 years later and he woulda got signed to K Records with this one.

'Till the End of the Day' -- a Kinks cover with Martha singing lead and Howard from the Look singing harmonies; Robert from the Urban Verbs contributes Marshall Keith-sounding guitar (begs the question who was copying whom?).

'N.Y. Punk' (by Solomon) is a fun effyou song 'I'm a New York punk, I don't take shit from no one'). 'You're a Tease Baby' is kinda horrifying in its misogyny if you take the lyrics at face value but the backup vocals by Kaiser's Kittens seem to take the edge off.

'I'm a Happy Person' is the most fun first-person song about mental illness since Porter Wagoner's 'Rubber Room.'

'Heartful of Soul' -- The ever soulful Martha Hull sings this Yardbirds cover.

'Iggy' -- Solomon and Kenne penned this paen to Iggy Pop (the refrain: 'Iggy, you've been put through hell').

'Lorraine' -- excellent (!) psych freakout towards the end of the song (which they shoulda faded out on but then, I didn't produce the album, so what do I know?).

'Death to Disko!' really just a chant with some added percussion, but very 'of the time.'

Of the outtakes, the alternate versions are interesting but inferior and non-essential. The few tracks that didn't get re-recorded for the album are worthwhile, especially 'Die Donna Die' and 'Slinky Satin Sidewalk Queen.'

The live tracks (some recorded at Cantone's (R.I.P.) here in Boston) are really rockin' and make me wish I coulda been there but are cruddy recordings and thus also non-essential.

In conclusion, a great album that should have been readily available on CD long ago. God bless Gulcher for putting this out!!