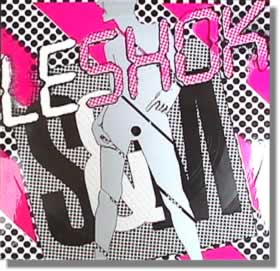 Songs: I Want The Beat b-w White Outs + on the cover of the single is the track No Fun At The Beaches.

On this here record, a posthumous release by Le Shok, the cover song on the cover ('No Fun at the Beaches') was originally by the Chosen Few, and Le Shok recorded their version whilst recording their sole LP, 'We Are Electrocution.'

The other two tracks were recorded during the band's short incarnation as a six-piece. It's all just the sorta great short-n-spazzy artpunk that they excelled at. I think the b-side ('White Outs') is the more substantial of the two originals, and the cover is also superb.

Super limited edition for all you record dorks.

+ a note from Carl: Last time I saw a single do this was The Psychedelic Furs 'Dumb Waiters' seven inch. On that single the sleeve had segments of 'Into You Like A Train', 'I Just Want To Sleep With You', 'Pretty In Pink' pressed right onto the cover as a transparent flexi preview of their not yet released second record. Le Shok go one better than The Furs by giving up a great cover of The Chosen Few's 'No Fun At The Beaches.'