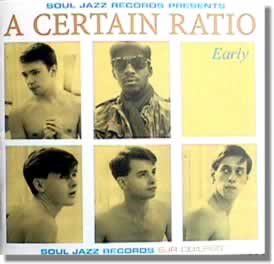 A Certain Ratio finally get their due on this much needed 2-CD set covering their career from 1978-85 as only the people at Soul Jazz Records could do it. I have always thought of A Certain Ratio as a second rate Joy Division although I always knew there was more to them than that. While some of their earliest tracks do have that JD sound, there's a decidedly more funky edge to ACR.

Wholly inspired by the late 70s funk of the likes of Brian Eno, having taken their name from his song THE TRUE WHEEL ('Looking for a certain ratio - Someone must have left it underneath the carpet'), Northern Soul, and Funkedelic, ACR coupled Eno's production value and vocal style with a decidely more earthy approach stemming from Brazilian rhythms, Jamaican dub and American funk. The end result was an avante-garde brand of funk with a punk edge. Centering their attention on this stable of rhythms made them a whole different Factory brand than that of Joy Division. An all white group with a black drummer by the name of Donald Johnson, whose drumming propels ACR beyond the droning JD vocals and to a new region of British music. You can get the sense that they were exploring many different sides of the same coin - Funk, Reggae, Disco, Punk, and while they may not have had the songs of JD, they certainly had a groove which would put JD to shame.

CD1.
1. Do The Du This is definitely Eno-eque, combining his late 70s funk rhythms with a harsher guitar sound and mechanical/drone-like vocals.
2. Flight There's a Dub-like echo on the drums and keyboards, scratchy guitar, and the whole song has an ominous tension in feel and in vocal. Still Eno-esque but with more of the Factory Joy Division sound.
3. Waterline Still Eno-esque - more on the straight=forward funk end of his work. There's a child-like vocal, coupled with some electronic voices, and slapping funk bass.
4. Shack Up The lead vocals are completely Eno-esque, this tune is way more sing-along-like than the more drone-like ones.
5. The Fox Nice modulated bass! Nice double-tracked voice and stop/start rhythm! The voice doesn't last nearly as long as it should though, which is a shame.
6. Blown Away There's perculating rhythms and echoed wordless voice coupled with effects on this track.
7. Gum There's a sharper horn-sound, along with sound effects of people talking in the background, and what sounds like female lead vocals.
8. Life's A Scream The style of the lead vocal changes on this track, it is less Eno-eque and more early of an 80s style. Overall this is more 'snythy' and the track is longer in that early 80s extended mix kind of way.
9. Skipscada Lots of percussion! Definitely African drum influenced.
10. Knife Slits Water Perfect mix of all the preceding tracks, with its odd child- like vocals, dub-like rhythm, interesting percussion, and funky bass.
11. Sounds Like Something Dirty Slower, methodical introduction with with experimental guitar and an electro-styled rhythm combined with a fusion-esque jazz stop and start with horn solos.
12. Touch A Definite early hip-hip influence has seaped in; there's an NYC feel on this track.
13. Saturn A jazzy instrumental with mutated trumpet solo (a la Miles Davis), ambiently strummed guitars, little block and Brazilian percussion all accenting the stop and start rhythms.

CD2.
1. All Night Party (original 7inch) This track is very subdued, but static, with very little percussion, and yet the guitars act percussive.
2. Faceless (from Graveyard and Ballroom) This track is hard funk, with tight rhythms - both the drum and guitars - with very Joy Division-influenced vocal, and Josef K styled guitars.
3. Do The Du (John Peel session) A Peel Session of the song from disc one.
4. All Night Party (John Peel session) A Peel session of first track on this disc. This time there are drums and great distortion on the guitars; tight beat.
5. Flight (John Peel session) A Peel session version of song from disc one.
6. Choir (John Peel session) A Peel version of a kicking song with 'choir' like voices and nifty electronic effects which combines their Joy Division/Eno influences nicely. Short enough that those sound effects don't get too annoying :)
7. Skipscada (John Peel session) A Peel session of track from disc one - tons of percussion, sounds a little less tight in this version.
8. Felch (orig NY mix) A slow fade-in intro to a slow-burner with light percussive taps that accent the droned guitar into a steady beat. When the main beat kicks in so does the slap-funk bass and animalistic grunted vocals. There's some fusion styled horn breaks utilized as the chorus.
9. Abracababra (12 ' released as Sir Horatio) Party noises, demonic laughter, and sirens start this one out with an ominous bass/drum dub thing. Deep into the soccer stadium dub.
10. Tumba Rumba (7inch B-Side) A Brazilian fusion sound which gets compilcated with the bass notes which all compliment the dub feel. More ambient sounds (schoolyard) come in when the rhythm does a change of pace.
11. Si Firmer O Grido (Touch Tape - Cassette only release) We end with an upbeat - early 70s blaxploitation styled jazzer. More crowd noise ambient sounds are mixed in.