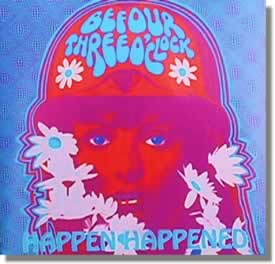 Los angeles teenager michael quercio formed the 'salvation army' in march of 1981. the band consisted of quercio on bass and vocals, troy howell on drums, and johnny blazing on guitar. four months later, they recorded a four-song demo tape which was heard by d. boone of the 'minutemen'.

boone was one of the earliest fans of the band and decided to release 2 of those 4 songs as a 45 on his label, NEW ALLIANCE. the songs he chose were 'happen happened' and 'mind gardens', and these two songs make up the 'salvation army's' first single. (the other two songs from that demo tape, 'for hours' and 'fight song', make their first appearance ever on this cd compilation, which contains everything the band ever recorded.)

johnny blazing left the group right after the 45 came out and was replaced by gregg louis guitierrez. this line-up recorded a batch of new songs and gave a tape of them to influential L.A. dj rodney bingenheimer of KROQ. rodney played songs from this demo regularly on his popular sunday night new music show 'rodney on the roq', where they were heard by lisa fancher of FRONTIER records, who promptly signed the band to her label.

they went into the studio and re-recorded all the songs from their demo tape as well as a few new tunes. these recordings made up their first and only full-length album. a couple of months after the release of this self-titled LP, troy left and was replaced by ex-'quick'/'weirdos' drummer danny benair. they also added keyboardist michael mariano at this time, turning the trio into a quartet. it was at this time that they were sued by the 'real' salvation army, and changed their name to the 'three o'clock.'

fans of the 'three o'clock's' more flowery sound who have never heard the 'salvation army' material might be surprised by the 'buzzcocks'-like punky speed of most of the songs here. many of the songs are influenced by the punk sound of the late '70's as well as the psychedelic sounds of the mid '60's, and pack quite an unexpected wallop. 'punky psychedelia' is a fairly accurate description!!

the young band's enthusiasm is very evident on these recordings, and they exude a rough-edged charm that is hard to dislike. add pulsating guitars, spiraling melodies, and the endearing little-boy vocals of michael quercio, and you've got quite a nifty band here.

track #2, although never previously released, is actually my favorite song here. the lyrics are the singer's sad, heartfelt plea to the new boyfriend of the girl he is desperately in love with.
track #5 heaps on the psychedelic stylings, with backward guitars and surreal imagery, making it a trippy nugget.
those two songs are my favorites, but there is plenty more of interest here, and i definitely recommend this cd, especially to fans of the 'three o'clock' who don't have this material yet.

INTERESTING FACTS TO KNOW AND TELL: