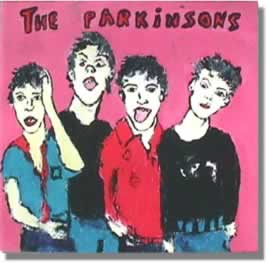 The Parkinsons have a somewhat unusual pedigree, despite their straightfoward rocking punk sound. Based in the UK, 3/4 of the band are Portuguese; their drummer is Scottish. The guitarist and bassist were both in the Tedio Boys, a great Portuguese punk band with numerous late-'90s releases on Elevator Records (also home to Boston's Showcase Showdown).

This mini-album (8 songs in just over 20 minutes) was produced by Jim Reid and Ben Lurie, both of formerly of Jesus and Mary Chain (and now in Freeheat). The raw and primitive recording (while we're not talking Teengenerate or Headcoats, it's certainly along those lines) suits the songs well.

Some tracks are more punk ('Too Many Shut Ups,' 'Angel in the Dark,' 'Hate Machine,' 'Bad Girl' (the unlisted bonus track)) and some are more rock ('Nothing to Lose'); others fall somewhere in between ('Primitive,' 'Universe,' 'Scientists.') While not as frantic as, say, the Hives, I'd bet they put on an amazing live show.

If you can't find an import copy of this on the cheap, never fear -- it's slated for domestic release in the near future. And apparently a US tour is in the works, as well; see you there!