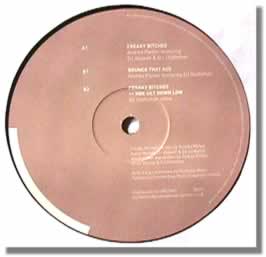 This is the first release on Touchin' Bass, the new label owned and run by Andrea Parker. On this 12' she collaborated with two of the most well known Detroit Ghetto Tech artists, DJ Assault and DJ Godfather. On their own these two artists are incredible misogynists - they are like parodies of the character 'Priest' from Superfly - but with Andrea Parker there is a darkness underneath: these 2 macho pimplike characters are being RUN by a women!

I like this 12' a lot. The A side has 'Freaky Bitches', which sounds like The Normal's 'Warm Leatherette' from the south side of Detroit. In the same way that Carl Craig gave Adult the gift of 'huge' in his remix of 'Hand To Phone', Andrea Parker's incredible skill has created a big sound that is fuller than either DJ Assault or DJ Godfather have ever had before. The song was written by Andrea Parker, with David Morley, DJ Assault and DJ Godfather. David Morley is an electronic artist whose 'Evolution' and 'Stardancer' 12's were released by Apollo Records.

On 'Bounce That Ass' Andrea Parker lights up the night. It has a very menacing sound that makes Miss Kittin sound like she is not trying hard enough, or Peaches like she's trying too hard. Andrea Parker has an effortless cool that runs through the songs on this 12'. And she has managed to get the foul mouths of DJ Assault and DJ Godfather into a 'risqué but acceptable' level.

The 12' ends with DJ Godfather's remix of 'Freaky Bitches.' Taken on its own I may really enjoy his mix, but after the two stunning tracks on the 12', his remix seems an unnecessary bonus. The remix speeds up the song and loops the vocals of DJ Assault and DJ Godfather. It is a jump up track that sounds a lot like the stuff these two artists record on their own.