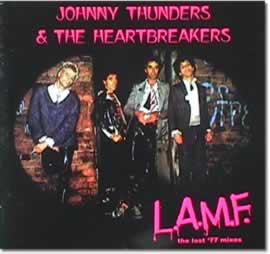 Want to hear one of the bands that really influenced the original 'Walk among Us' Misfits sound? Are you surprised that Johnny Thunder and The Heartbreakers are that band? You shouldn't be. Just listen to 'I Wanna Be Loved' and you will hear everything we loved about early Misfits (minus SF lyrics). The cool thing about Heartbreakers is that they could effortlessly turn into a band which would influence The Only Ones on a track like 'It's Not Enough.'

Certain bands get plagued by 'signature' songs. For the Heartbreakers those songs were 'Chinese Rocks' and 'Born to Lose', which comprised the A and B sides of their debut single. Both ARE amazing songs, but L.A.M.F. has 14 songs - every one crucial. L.A.M.F. (Like A Motherf**cker, a gang territory 'keep off our turf' warning) was the NYC reaction to the London boys aggressive punk rock, which Johnny and Jerry Nolan were exposed to in England, being celebrities through their membership in The New York Dolls, which Malcolm McLaren managed. Johnny Thunders was the coolest - he had THE best hair (along with Howie from The Blessed), the coolest guitar,poses, girls, and songs. All of the Heartbreakers did: Walter Lure ('Waldo') was tall and thin, Jerry Nolan had great bleached hair and awesome mohair sweaters. Johnny Thunders guitar sound was like a stinging bee. He played two strings at once in a slightly off way that caused the coolest sound. Listen to 'Pirate Love', 'I Love You', 'All By Myself', and 'Let Go' to hear the best that there is.

This CD has 'the lost '77 mixes.' All Heartbreakers fans know the stories about this record. In keeping with their personalities the band recorded the record in several London studios, grabbing the controls from various engineers and tweaking them till the tapes sounded great in the studio, then blew out of the studio to cop, leaving the mix to people that did not have an understanding of the band. The mix was so equalized that it removed a lot of the power from the band. This is similar to what happened to The Dead Boys on their 'We Have Come For Your Children' LP, produced by Felix Pappalardi. The difference is that Heartbreakers were hacked by people without the skills that ex-Mountain member Felix Pappalardi had.

In 1984 it was decided that LAMF would get a proper mix once and for all. What happened instead is that Johnny and Tony James (of Generation X and Sigue Sigue Sputnik) blew through it in three nights and once again blew a chance for a proper mix, leaving fans wishing for even the imperfection of the original mix. What this CD has is painstakingly assembled original takes gathered from 35 spools of 1/4' tape, each containing 5 to 10 mixes from the LAMF sessions. This set of lost '77 mixes is dedicated to Johnny Thunders 1952-1991 and Jerry Nolan 1946-1992. My highest rating.