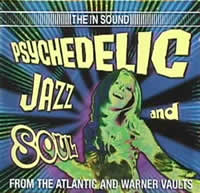 11 tracks of psychedelic jazz and soul taken from the Atlantic and Warner vaults, this compilation presents an incredible listening experience.

Similar in feeling to many a Soul Jazz release - perhaps inspired by them too - Warner UK had a tremendous amount of material to cull from for this 'In Sound' collection.

All in all this compilation is a 10 out of 10 - or since there are 11 tracks an 11 out of 11. And I think most of this could fit in either a rock or jazz format (or - hey how about jazz or funk?)- the bottom line is you won't lose if you check this disc out.