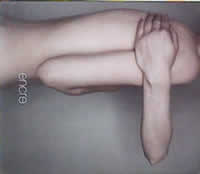 Encre (French for 'Ink') is French artist Yann Tambour. He is the owner of a great sound, spread though the 8 songs on this 33 minute CD. He sounds like Katerine if Phillipe Katerine idolized Matmos and Müm instead of Serge Gainsbourg.

Arab Strap and My Bloody Valentine fans will also find plenty to grasp onto in Encre's sound. Put on the CD and Trouves-en un Autre comes on with the best of all ingredients in a perfect blend. This is wild! You wouldn't think such a blend would work (how to fit the left-field sounds of Matmos into pop songs?), but it does.

The second track Nocturnes shows you that Encre did not have only one good song to start off a CD with. I think these two cuts are massive. The sixth song is Burlington, Vermont. As I am writing from Boston, Massachusetts I wonder what Encre's connection to New England is. Hey Yann: play Boston if you come and visit!

Seventh track Foehn is the last of the four faves I have for this record. Like Burlington, Vermont the sound is not quite as wild as the first two tracks, but everything is once again in the right place and the material works.

I bought this CD when visiting in Paris. I asked a guy who worked in the store what local band was best that no one outside of France would know. He told me that this CD was short, but it was his favorite disc of the year. Though I didn't get his name, I owe that guy a thanks.