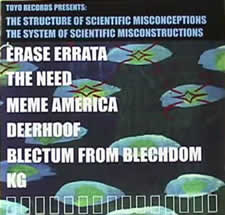 With sympathetic vibrations touching all corners of my skull, my musical adventure is complete. This compilation features the likes of Erase Errata, The Need, MeMe America, Deerhoof, Blectum From Blechdom, and Kg. The result is quite a spectra of mental flavors for you to enjoy.

Erase Errata so far is a relative new comer. Having released their first album 'Other Animals' in 2001 on Troubleman Unlimited, they are currently touring out-west with Le Tigre and Chicks on Speed. Future tour dates will place them on the East Coast soon. But the music, the music! Erase Errata drives a rather distinct sound: discordant lo-fi one instant, the next, electronica lo-fi with subdued guitar, with delicate slightly raw female vocals. The overall effect recalls early June of 44 and a very subdued Nation of Ulysses with its use of trumpets to intensify the raw edge at times. Tantalizing, no?

The Need (label: Chainsaw Records) was established with a series of seven inches and compilation work in 1996. Their self named debut album came out in 1997 followed by 'The Need is Dead' in 2000. Their contributions to the comp come off as hard, fem. punk, with deference paid to Lungleg, Slant 6, and the Lunachicks. But best of all, The Need has chosen to lace their selections with what may only be described as dungeon overtones. Hard fuzzed guitars and talking background effects dominate The Green Manalishi, almost like the days of big-hair 80's bands.

MeMe America is a relative newcomer with no ep's, singles or albums out. Known for making movies and then playing as a live soundtrack, I was very surprised with the scope of their sound. Covering everything from campy organ and electronic duneon rock (see above) to almost straight out punk, again with female vocals, they remind me a lot of Julie Ruin in scope and sound. That I may pique your interest even more, they cover it all in only one rather long track.

Deerhoof (label: Kill Rock Stars ) released their first album in 1997 called 'The Man, The King, The Girl,' and their second, 'Holdy Paws' in 1999, both on Kill Rock Stars Records. Deerhoof members are no slackers, Oh No! Members side projects include The Curtains, THTEETHE, and Barefoot. Deerhoof is also a contributor on the recent compilation Better than the Beatles: A Tribute to The Shaggs. Deerhoof marks each of their tracks with almost ever-present organ harmonies and solos. Female vocals cover a mix of sounds, from a subdued 60's groove pop to poppy female punk again reminiscent of Julie Ruin with fuzzed over vocals.

My experience and ear begins to fail me with Blectum From Blechdom ( label: Tigerbeat 6), but in the name of sincere effort I push on. Albums include the 'Messy Jesse Fiesta' on Deluxe and recently, in 2001, Haus de Snaus on Tigerbeat6. Using a rather exuberant collection of electronic samples, Blectum From Blechdom switch from chirpy electronic ambient to Subdued groove funk, and are the first band on the compilation to use male vocals. I fear I lack the vocabulary to describe them, but their sound is crisp, light at one instant and then fuzzed and over-toned the next.

The final band to join the comp is the post-Kicking Giant band KG. With more than half a dozen appearances on various compilations and recordings, KG put out their only album in 1997 titled, 'Anture Morte' with the label Fortune 5. What about KG's sound, you ask. Well, they come at you rather unexpectedly. KG has a sound almost wholly different from the rest of the compilation. With ska and reggae influences, KG is happy, sprightly in sound, using electronica and film clips to augment their guitar, organ and drum machine. Influences seem to come to from various venues, the only one I can think of right now being April March but my mind hears so many others laced in amongst the tones.

Overall, the main theme seems to be subdued. The sounds are nice and relaxed and seem to fit together into a nice panorama of tastes. Overall, I like the compilation, my favorites being Deerhoof's Sunny Side and Get Along With Little Doggies for their sprightly, vintage feel and The Need's Green Manalishi if for nothing else than the dungeon-like effects. I did not care for KG's contribution. Thank you, I hope you enjoy.