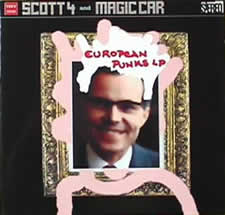 A few years Ago Scott 4 released several singles and an LP that seemed like they would bring this band to wide notice.

Scott 4 had a unique slant, with a Krautrock electronic sound and a cowboy hatted lead singer plying up a country angle. It was an odd combo that at times worked well.

This LP is the first thing Scott 4 have released in several years. They have teamed up with English folk band Magic Car for a collaborative effort. The result is much mellower than Scott 4 had been in the past, but will be pleasing to fans of Tindersticks.

Opening track European Punks is the best track on the record. It is a nine and a half minute cut that is Tinderstick bliss. There is a touch of Stereolab (the bass) or High Llamas (the keys) in the second half as well.

Another collaborative track I like on this is For Teens In The Meantime. There are 60's styled harmony vocals and a soft pop feel to that track.

There are several cuts that each band do separately as well. Magic Car's Shiny Cattle has vocals that almost remind me of Tracy Chapman, but the cut is pretty good. Scott 4 do a song called In The Time Of Pop & Roll that has the same vocal effect that Cher and Daft Punk used. Just as Magic Car transformed the Tracy Chapman sound into a good track, Scott 4 manage to make In The Time Of Pop & Roll my fave cut from them on this LP.

There are 9 long tracks on this record. The sound on the tracks I have not mentioned is good, it is just not my thing. For me, the winner of the set remains the first cut, the Tindersticks styled European Punks.