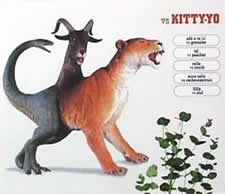 A couple of years ago Belgium label Quatermass put out an LP called vs Rather Interesting.

This time Quatermass have chosen Berlin label Kitty-Yo. In the few years that Kitty-Yo have been players in the music biz their releases have gone from curiosities to key players in the International underground New Sound movement.

Vs Kitty-Yo has ten tracks - five original songs from the Kitty-Yo catalogue and five remixes. The best track is the first: Add N to (X) remix the Gonzales track Higher Than You. It is a darn shame that the cut cannot be played on the radio due to the presence of a couple of curses. Add N to (X) added some music to the cut as well as remixed it. The remixed Higher Than You rises far above the original version.

Peaches song Lovertits is here both in its original form and as remixed by Tal. I like the original better. The remix is just too disjointed, with sharp edits as if changing through radio stations.

Rechenzentrum's song Submarine is mixed by Mira Calix. I like the original better here as well. Mira Calix removed the beat from the cut and took away its root. Lovers of abstract electronics will probably like the treatment she gave the track.

Couch contributed Alle Auf Pause to the comp, and Calla remix it to great effect. I like the Calla mix a lot.

I don't remember a Kitty-Yo band Stol (Polish for Table), but Stol have a song called [010], and it is remixed by Fibla. I like the Fibla mix better than the original too.

This compilation is not as good as I had hoped. The five original versions could have been omitted and five more remixes could have been presented. Add that to the frustration that the best song can't be played on the radio and you have me griping.

If you are a Gonzales fan, you will need this record unless the Add N to (X) mix comes out as a single.