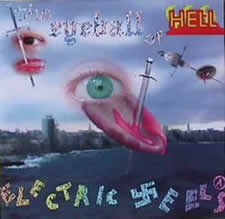 At a time when the most abrasive music is being made on tiny machines, reexperiencing the jarring, aural nihilism of the Electric Eels is a jolt to everyday perceptions of both 'punk rock' and 'rock n' roll.'

Rising out of the apocalyptic pits of Cleveland, Ohio, The Eels, archived on the Scat Records release The Eyeball of Hell bear the doom of a city's whose Cuyahoga River once caught fire, creating an inferno of trash and pollution that actually moved down stream.

With hypnotically rancid riffs and lyrics as sadistically genius as, 'I don't know what I know, I just want to shoot it,' (from their proto-punk anthem Agitated) the Eels are the standard bearers of degenerate rock.

This 24 track release offers something for both the virgin-eared and converted Eels zealots. The hits: Agitated, Cyclotron, Jaguar Ride line up one after another.

On the other end, eleven of the tracks are first seeing the light of day, ranging from the typical Eels frenzy to spastic, thirty-second bursts of feedback and noodling to broken down free jazz sessions.

As a whole, The Eyeball of Hell and its extensive liner notes, penned by Eels guitarist John Morton, labors to make the Eels seem like more than unskilled, amphetamine-addled musicians history may have taken them for.

The atonal trumpet on many of the unreleased tracks predates no-wave and Morton's own citing of avant-garde impressarios like Cage and Sun Ra as Eels influences, gives the impression that the Electric Eels conceived their brand of devilish rock as something experimental.

Twenty-five years later, I swear I can hear a Strokes song in the intro riff of Tidal Wave. This is no diss. It's genuinely amazing to hear the various strains of the last quarter-century of 'underground' rock generated from a band as despicable, ugly, and unsellable as the Electric Eels.

In 1975, John Morton looked like a roadie for the World Wrestling Federation and the Electric Eels were helping invent rock as we now know it.